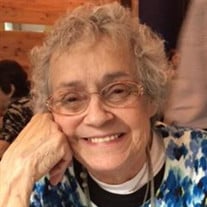 DANVERS- The world and our family lost a vibrant and loving woman with the death of Grace Elizabeth (Morin) Eldridge, on November 18, 2021 at the age of 90. She passed peacefully and surrounded by her family. Grace is survived by her adoring and loving husband John Rogers Eldridge with whom she shared over 66 years of marriage. Born on December 14, 1930, she was the daughter of the late Cathleen (Brown) (Morin) O’Leary and Octave Morin. Grace was a lifelong resident of Danvers and was a graduate of Holten High School. She worked for many years for Hotwatt of Danvers. Grace was the Queen of the Eldridge family. Her humor and sass were priceless but above all her love for her family was unprecedented. Her greatest joy came from family celebrations where she and John would be surrounded by family. She could often be found at her grandchildren’s ball games, recitals, birthday parades & weddings. Gracie’s cooking was enviable with her spaghetti & meatballs, chicken divan & American chop suey being staples at Thursday night dinners at Grammy’s. She was the loving & beloved mother to her children, Mark Eldridge and wife Colleen of Danvers, John “Jack” Eldridge and wife Connie of Danvers, Christine Hunt of Danvers and Carol Eldridge-Sax and husband Michael of Salem, her brother Nelson Morin and wife Phyllis of Danvers, her brother-in-law Richard Rogers and wife Patricia of Danvers, by her adoring grandchildren Jillian Eldridge Bernard & Jeff Laws of Danvers, Kerri Ann Eldridge Durand & Andrew Adams of Nashua, Evan Eldridge & Alexandra Strangie of Danvers, Lily Eldridge of Danvers, Jacqueline Eldridge of North Carolina, Jeffrey Eldridge & Louise Wennerstrom of Lynnfield, Jennifer & Greg Langathianos of Boston, Amanda Hunt of Boston, Cameron Hunt of Danvers, Morgan Sax of Salem, Benjamin Sax & JaLisa Hoekstra of Salem and Noah Sax of Salem, her great-grandchildren Brooke, Austin, Evan, Skylar, Autumn, Mary-Grace, Olive, Louie, and Christian and many nieces, nephews, cousins and extended family. She was predeceased by her siblings Evelyn Coleman, Arthur Morin, Norma Lawlor & William Morin and by her granddaughter Cathleen Elizabeth Hunt. Her family would like to dearly thank Hospice Care, Guardian Healthcare and their amazing teams and especially Miguelina. Her funeral services are private. Arrangements made by C.R. Lyons & Sons, Funeral Directors, 28 Elm St., Danvers. In lieu of flowers please make a donation in Grace’s name to Breast Cancer Research Foundation at www.bcrf.org or mail to Breast Cancer Research Foundation, 28 West 44th St., Suite 609 NY, NY 10036.

DANVERS- The world and our family lost a vibrant and loving woman with the death of Grace Elizabeth (Morin) Eldridge, on November 18, 2021 at the age of 90. She passed peacefully and surrounded by her family. Grace is survived by her adoring... View Obituary & Service Information

The family of Grace E. Eldridge created this Life Tributes page to make it easy to share your memories.

DANVERS- The world and our family lost a vibrant and loving woman...