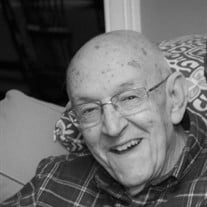 TOPSFIELD- Gerald D. Schilling, 84, passed away at Addison Gilbert Hospital on January 3, 2018. He was the loving husband of Charlotte (Hodick) Schilling with whom he shared 62 years of marriage. Jerry was an avid outdoorsman. He hunted in Maine with his Agawam Pistol Club friends and fished at his camp in Moscow, Maine. He hiked sections of the Appalachian Trail and loved traveling the old logging roads there. His camp was his pride and joy, spending 32 years of happy times there with family and friends. His greatest joy was teaching his grandchildren to fish off the dock, boat and telling the stories of the “Big One” that got away! He was a “Flatlander” who became a Mainer. After his retirement, Jerry and his wife Charlotte drove across country three times, visiting every state in the U.S. He loved to hop in the car and drive to new destinations. Jerry served our country with the United States Navy during the Korean War and was honorably discharged. He was also a communicant of Saint Rose of Lima Parish in Topsfield. He will be sadly missed by his wife, Charlotte, his son and daughter-in-law, Robert and Gina Schilling of York, Maine, his daughter and son-in-law, Lisa and Richard Newton of Danvers, his grandchildren, Timothy Smorczewski of Peabody, Michaela Schilling of York, ME, Cameron Schilling of Lake Tahoe, CA, and Chelsea and Nicholas Schilling of York, ME and his special canine friend, Dutchess. He was predeceased by his brother, Bobby D. Schilling. His Funeral Mass will be celebrated at 11AM on Tuesday, January 9, 2018 in Saint Rose of Lima Parish, 12 Park St., Topsfield. Visitation will be held on Tuesday in the church one hour prior to the Mass from 10AM-11AM. Burial is private. In lieu of flowers, donations may be made to the Saint Vincent de Paul Society c/o Saint Rose of Lima Church, 17 Prospect St, Topsfield, MA, 01983 or Wounded Warriors Project, PO Box 758517, Topeka, KS 66675.

TOPSFIELD- Gerald D. Schilling, 84, passed away at Addison Gilbert Hospital on January 3, 2018. He was the loving husband of Charlotte (Hodick) Schilling with whom he shared 62 years of marriage. Jerry was an avid outdoorsman. He hunted... View Obituary & Service Information

The family of Gerald D. Schilling created this Life Tributes page to make it easy to share your memories.