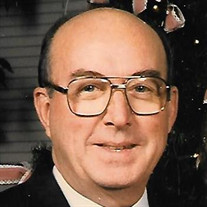 Gerald E. Rideout, 82 formerly of Danvers, MA, Watertown, CT and Pompano Beach, FL, died Tuesday, April 7, 2015 at Lanessa Extended Care in Webster, MA. Born in Waite, Maine, he was the son of the late Edmond and Allison (Holmes) Rideout. He is survived by his beloved wife of 63 years, Norma A. (Labelle) Rideout, he was a loving father to his son, Jerry E. Rideout and his wife Anne of Chicopee, MA, his daughter, Rhonda and her husband Paul Paradise of Woodstock, CT and daughter, Kim Rideout and her wife, April Morrison of Torrington, CT, five grandchildren, two great grandsons and his sister Patricia Arthur. He was predeceased by his sister, Shirley Perkins. Gerald was a US Army Korean War Veteran. He retired from Risdon manufacturing company in Thomaston CT, where he was executive VP and General Manager of Plastics and Packaging. An avid golfer, he loved family and traveling. His Funeral Service will be celebrated at noon on Saturday, May 16, 2015 at C.R. Lyons & Sons, Funeral Directors, 28 Elm St., Danvers. Burial will follow in Walnut Grove Cemetery. Visiting hours will be held on Saturday prior to the service from 10:45AM-11:45AM in the funeral home. In lieu of flowers donations may be made in Gerald’s name to the Alzheimer’s Association, 480 Pleasant St., Watertown, MA 02472.

The family of Gerald E. Rideout created this Life Tributes page to make it easy to share your memories.