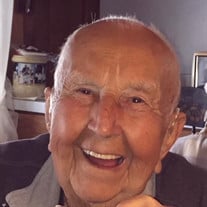 DANVERS- George R. Summers, 92, passed away on Thursday, December 28, 2017 in the Kaplan Family Hospice House. He was the devoted husband of the late Mary (Halupowski) Summers with whom he shared 50 years of marriage. Born in Cambridge on September 29, 1925, he was the son of the late George and Susie (Berse) Summers. George was raised and educated in greater Boston and moved to Danvers in 1956. He had worked as a carpenter for many years, renovating his own home. He served our country with the United States Navy during WWII and served on the U.S.S. Varian and U.S.S. Fowler. George had been a member of several veteran’s organizations including, the American Legion Post 331 in Beverly, the Destroyer Escort Historical Assoc. and the Navy League of the Unites States. He also belonged to the Senior Center and the Polish Club in Danvers. He enjoyed family gatherings, travelling, Hawaiian vacations and playing poker and cribbage. He was known affectionately as Uncle Bob to several nieces, nephews, grandnieces and grandnephews including, Marsha and Walter Walor of Margate FL, Linda Watson of Reading, Bruce Hamilton of Danvers, Cheryl Walor Paulin of Hanover, PA and Pamela Walor Bushek of Margate, FL (grandnieces). He also leaves his step-sister, Marion Spicer of Easton, PA and dear friend, Karen Rowan and Bill Corliss, among many other friends and extended family. MASS DATE AND TIME HAVE BEEN CHANGED DUE TO THE WEATHER (visitation will remain today) His Funeral Mass will be celebrated at 11AM on Friday, January 5, 2018 in Saint Mary of the Annunciation Church, 24 Conant St., Danvers. Visitation will be held on Wednesday, January 3, 2018 from 3-6PM at C.R. Lyons & Sons, Funeral Directors, 28 Elm St., Danvers. Burial is private. In lieu of flowers, donations may be made to the charity of your choice.

DANVERS- George R. Summers, 92, passed away on Thursday, December 28, 2017 in the Kaplan Family Hospice House. He was the devoted husband of the late Mary (Halupowski) Summers with whom he shared 50 years of marriage. Born... View Obituary & Service Information

The family of George R. Summers created this Life Tributes page to make it easy to share your memories.