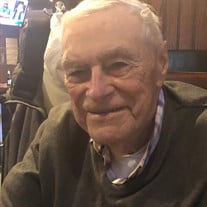 George F. O’Brien, 94, of Peabody, a long-time resident of Beverly, passed away on Monday May 2, 2022 at the Kaplan Family Hospice House in Danvers. George, the son of Mary Etta O’Brien, was born in Dorchester on July 14, 1927. He was preceded in death by his wife, Barbara J. O’Brien, who passed away in 2010 at the age of 81. George is survived by his daughter, Jean O’Brien and her husband Greg Lauffer of Hamilton, his son, Bruce O’Brien and his partner Geraldine Shea of Swampscott, and two grandchildren, Jeff Lauffer of Melrose and Dale Lauffer of Hamilton. George enlisted in the U.S. Navy in 1944 at the age of seventeen and proudly served his country for twenty years. Most notable contributions were the supply of arms to Allied forces via UTE ships in the battles for Okinawa (World War II) and Inchon (Korean War). Following the Navy, he worked for the U.S. Postal Service in Danvers for twenty years. Later in life, beginning at the age of 83, George volunteered at Beverly Hospital from 2010-2021. He contributed over 2,500 hours to a job that brought him purpose and great pleasure. George was committed to the support of many organizations including the American Legion, Veterans of Foreign Wars and Macular Degeneration Association. His Funeral Mass will be celebrated on Saturday, May 7, 2022 at 10:30AM in Saint Mary of the Annunciation Church, 24 Conant St., Danvers. Burial with military honors will follow in North Beverly Cemetery. Visiting hours are Friday, May 6, 2022 from 4-6PM in C.R. Lyons & Sons Funeral Directors, 28 Elm St., Danvers. In lieu of flowers, donations in George’s memory may be made to the Macular Degeneration Association, 5969 Cattleridge Boulevard, Suite #100, Sarasota, FL 34232 or the American Legion, 3 Judson St., Beverly, MA 01915. To share an expression of sympathy with George’s family, please visit www.LyonsFuneral.com.

The family of George F. O'Brien created this Life Tributes page to make it easy to share your memories.