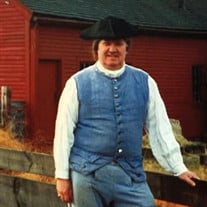 George J. Meehan, 86, died peacefully on January 3, 2022 at the Rosewood Nursing Center in Peabody following a lengthy illness. He was the loving husband of Cynthia (Hawkes) Meehan, with whom he shared sixty-three years of marriage. Born in Orange, NJ on October 23, 1935, he was the son of the late Christopher and Winifred (Angus) Meehan. He was raised and educated in New Jersey and earned a bachelor’s degree from the University of Maine at Orono and later earned a master’s degree from Salem State College. George served honorably in the U.S. Army from 1958-1960. A longtime elementary school teacher, he began his career in the Reading Public Schools and then was a teacher and assistant principal in Danvers until the time of his retirement. He was a founding member of the Danvers Alarm List Company in 1974, reenacting the role of Captain Samuel Flint. He was also a dedicated volunteer at the Rebecca Nurse Homestead. A music lover, George belonged to the Northshoremen Barbershop Chorus and to several quartets. He was a longtime member of Holy Trinity United Methodist Church and a member of the Amity Mosaic Lodge A.F. & A.M. In addition to his wife, he leaves three children, Dawn-Marie Wetherbee and her husband Douglas of Danvers, Melissa Silver and her husband Chris of Maine, and Glenn Meehan of California, four grandchildren, Rebecca Snow and her husband Jeffrey, Ryan Hawkes Wetherbee, Samantha Silver and her wife Sara, and Erin Silver, four great-grandchildren, Grace, Brayden, Ben, and Anna, his brother-in-law, Glenn Hawkes and his wife Erika, three nephews, Elijah, Jesse, and Cyuba, a niece, Vanessa, and many dear friends. George’s family is grateful to the staff of the Rosewood Nursing Center for the compassionate care shown to George during his illness. His Funeral Service will be held on Saturday, January 8, 2022 at 11AM in C.R. Lyons & Sons Funeral Directors, 28 Elm St., Danvers. Burial will follow in Walnut Grove Cemetery. Relatives and friends are invited. Visiting hours are Friday from 4-7PM in the funeral home. Facial coverings are required in the funeral home. In lieu of flowers, donations in George’s memory may be made to the Danvers Alarm List Company, 149 Pine St., Danvers, MA 01923. To share an expression of sympathy with George’s family, please visit www.LyonsFuneral.com.

George J. Meehan, 86, died peacefully on January 3, 2022 at the Rosewood Nursing Center in Peabody following a lengthy illness. He was the loving husband of Cynthia (Hawkes) Meehan, with whom he shared sixty-three years of marriage. Born in... View Obituary & Service Information

The family of George J. Meehan created this Life Tributes page to make it easy to share your memories.