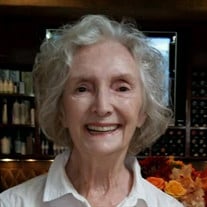 Genevieve A. (Sullivan) Olivier of Irvine, CA formerly of Dedham, died December 30, 2017 at Atria Senior Living, Irvine, CA. She was 83. Genevieve was the beloved wife of Ret. Major Donald G. Olivier, who predeceased her in 1996. Genevieve was born in Weymouth to Cyril and Maurine Sullivan, who came east from Missouri. She was the youngest of 8 children and nicknamed “Gempy”. Her father named his Friendship sloop the SS Gempy. Genevieve was predeceased by her brothers James, John and Cyril, Jr. Sullivan, and by her sisters Patricia Sweeney, Barbara Gray, Mary Bedard, and Sr. Therese of the Child Jesus (Elizabeth). Genevieve is survived by her daughter Rosemary Driscoll Dissel (Keith) of Reading, her sister-in-law Dianne Sullivan of Wellesley and many nieces and nephews. Genevieve is also survived by stepdaughters Kathy Biegel, Karen Cornwall and Kimberly Lyons of California. Genevieve had a taste for independence and adventure. At the age of 23 she decided to go west to Denver; she had heard it described as the “Golden City”. Genevieve found work at an insurance company and indulged her interest in the arts by working backstage at the local community theatre. A few years later she returned home to continue her education. While earning her bachelor’s degree from Boston College, Genevieve worked as an administrative assistant at major universities, supporting academic research programs in the field of space exploration. Genevieve later met and married “her Don”, and moved west to settle in Southern California. Genevieve was active in the Irvine community and her church, St. John Neumann. Genevieve’s Funeral Mass will be celebrated on Wednesday, January 17, at 11:00AM in the Chapel of the Discalced Carmelite Nuns, 15 Mt. Carmel Rd., Danvers. Burial will follow at Spring Grove Cemetery, 124 Abbot Street, Andover. Visiting hours are Wednesday from 9:30-11:00AM in the chapel. In lieu of flowers, donations may be made in Genevieve’s memory to the Discalced Carmelite Nuns, 15 Mt. Carmel Rd., Danvers, MA 01923.

Genevieve A. (Sullivan) Olivier of Irvine, CA formerly of Dedham, died December 30, 2017 at Atria Senior Living, Irvine, CA. She was 83. Genevieve was the beloved wife of Ret. Major Donald G. Olivier, who predeceased her in 1996. Genevieve... View Obituary & Service Information

The family of Genevieve A. Olivier created this Life Tributes page to make it easy to share your memories.

Genevieve A. (Sullivan) Olivier of Irvine, CA formerly of Dedham,...