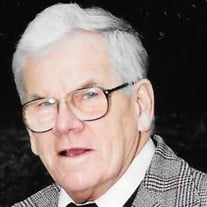 DANVERS-Frederick T. Kulakowski, 89, passed away peacefully in his home June 9, 2018. He was the beloved husband of the late Doris Kulakowski with whom he shared over 60 years of marriage. Fred was the devoted father of Kevin Kulakowski and his wife Lucy, Diane Kulakowski Morris, Cynthia Sliney and Raymond Kulakowski and his wife Dawn. Born in Salem on December 18, 1928, he was the son of the late Roman and Teresa (Fay) Kulakowski. He is also survived by his sister, Bertha Avigian and her husband John. He was predeceased by his brothers and sisters, Raymond, Joseph, Marie, Gertrude, Martha, William, Rita, Vincent, Arthur and Richard. Grampy as he was known, was the proud grandfather of Brant, Todd, Angela, Christopher, Nicole, Jacklyn, Kristen, Chad, & Roman. He is also survived by many nieces and nephews. Fred was employed as a Master Electrician for Sylvania for over 28 years and was a member of the Quarter Century Club. He was known as the singing electrician who brought a smile to all his co-workers faces when he would show up to sing his rendition of happy birthday. A Danvers resident for over 60 years, Mr. Kulakowski was a weekly communicant of Saint Mary of the Annunciation Church. He was a member of The Holy Name Society as well as the Knights of Columbus. He served as a scout leader for Troop 58 of Danvers. He enjoyed working with his hands and could fix any electrical, plumbing or carpentry challenge. If he made it, then it was never going to come down. He was an honorably discharged veteran who proudly served his country as a member of the United States Air Force. He was stationed in Tachikawa, Japan and was the recipient of the Korean Service medal and the UN service Medal. His Funeral Service will be celebrated at 11AM on Thursday, June 14, 2018 at C.R. Lyons & Sons Funeral Directors, 28 Elm St., Danvers. Burial will follow in Saint Mary Cemetery, Salem. Visitation will be held prior to the service on Thursday from 9:30-10:45AM. In lieu of flowers, donations may be made to Care Dimensions, 75 Sylvan St., Danvers, MA, 01923.

DANVERS-Frederick T. Kulakowski, 89, passed away peacefully in his home June 9, 2018. He was the beloved husband of the late Doris Kulakowski with whom he shared over 60 years of marriage. Fred was the devoted father of Kevin Kulakowski and... View Obituary & Service Information

The family of Frederick Thomas Kulakowski created this Life Tributes page to make it easy to share your memories.