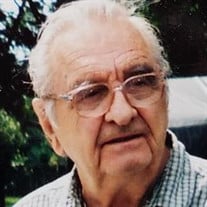 Frederick S. Jordan, 88, died Friday evening, November 18, 2016 at Beverly Hospital. He was the husband of the late Matylda “Tillie” Jordan, with whom he shared sixty-two years of marriage. Born in Salem on Nov. 24, 1927, he was the son of the late Walter and Stella (Stefanski) Jordan. He was raised and educated in Salem and was a graduate of Salem High School. In his early teen years, Fred worked at a relative’s farm, the Dunajski Dairy Farm in Peabody where he did everything from milking cows to delivering milk. He served honorably in the U.S. Navy during WWII aboard the USS Greenwood, the USS Ellington, and the USS K.D. Balie. A Danvers resident for nearly sixty-five years, Fred was employed at General Electric in Lynn and retired after an amazing fifty-eight years of service. In retirement, he worked part-time in his son Ed’s business, Metallic Fusion Welding. He is survived by two sons, Edward Jordan and his wife Charlotte of Danvers and James Jordan and his wife Stephanie of Hamilton, three grandchildren, Aniela, Timothy, and Eric, and several nieces and nephews. He was predeceased by his son, Steven Jordan, and two sisters, Loretta Dick and Stella Lee. From the bottom of their hearts, Fred’s family would like to express their loving appreciation for the dedicated care shown to both Tillie and Fred during their illnesses by their devoted caretaker, Toby McCormick. His Funeral Mass will be celebrated on Wednesday, November 23, 2016 at 10AM in Saint John the Baptist Church, St. Peter St., Salem. Burial will follow in Saint Mary Cemetery, North St., Salem. Relatives and friends are invited. Visiting hours are Tuesday from 5-8PM in C.R. Lyons & Sons Funeral Directors, 28 Elm St., Danvers Square.

The family of Frederick S. Jordan created this Life Tributes page to make it easy to share your memories.