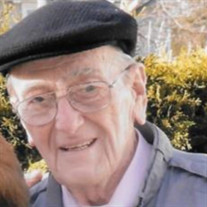 DANVERS- It is with great sadness that the family of Frederick Calvin Acres, age 98, announces his passing on August 22, 2020. Fred was born on March 19, 1922, in Malden, to parents Harold Roy and Cora (McCarthy) Acres. He graduated from Malden High School and New England Aircraft School. He was a decorated sailor who proudly served in the United States Navy aboard the USS Savo Island –CVE78 aircraft carrier during World War II in the Asian Pacific Theater. In 1950 he married Barbara Ann Reynolds of Salem, with whom he spent 60 years of marriage and raised three children in Beverly. During his children’s formative years Fred was active in Beverly Little League, Al Churchill’s Bears Midget Football Team, and the Ryal Side Civic Association. Fred was especially proud of the 12 years he served on the Beverly Airport Commission including two terms as its chairman. Fred worked for 43 years at General Electric in Lynn in the Aircraft Gas Turbine Division, retiring in 1984. He loved dancing with his wife Barbara and regaling family and friends with tales of his youth. The legendary sweet 100’s from his vegetable garden were sought after by young and old alike throughout his neighborhood. He was a devoted family man, friend, and neighbor. Fred is survived by daughter and son-in-law Sharon and Stan Ozereko of Danvers, daughter Patricia Acres White of Danvers, son Kenneth C. Acres of Manchester, NH, Fred’s sister Carol Acres of Malden, his six grandchildren and their families: Michael MacDougall of Louisiana, Jessica Denehy, Navy Commander Jarrod and Celia Ozereko of Guam, Zachary and Alicia Ozereko of Danvers, Alex Acres and his partner George Southworth of Washington, D.C., and Robert and Mandee Acres of NH. He was predeceased by his wife Barbara Reynolds Acres, his five brothers: John, Harold Jr., Richard, Chester, and Kenneth Acres, and his son-in-law, Robert B. White. He also leaves a cherished extended family of great-grandchildren, nieces, and nephews. A private funeral service was held. A celebration of his life will take place at a future date after the current health risks have passed. Online condolences may be made at www.LyonsFuneral.com

DANVERS- It is with great sadness that the family of Frederick Calvin Acres, age 98, announces his passing on August 22, 2020. Fred was born on March 19, 1922, in Malden, to parents Harold Roy and Cora (McCarthy) Acres. He graduated from Malden... View Obituary & Service Information

The family of Frederick C. Acres created this Life Tributes page to make it easy to share your memories.

DANVERS- It is with great sadness that the family of Frederick...