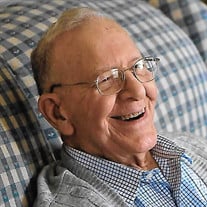 Wilfred A. “Fred” Vaillancourt, 92, died Thursday morning, January 18, 2018 following a lengthy illness. He was the loving husband of Helen (Horgan) Vaillancourt, with whom he shared 67 years of marriage. Son of the late Amedee and Alexina (Gagnon) Vaillancourt, Fred was raised and educated in Danvers and was a graduate of Holten High School. He served honorably in the U.S. Marine Corps during World War II, where he was a member of the 3rd Marine Division in the South Pacific at Guam and Iwo Jima. He then served for several years with the 102nd Field Artillery in the U.S. National Guard. Fred was employed by the Town of Danvers as a firefighter for thirty-one years, retiring in 1982 and was a member of the Danvers Firefighters Relief Association. A lifelong Danvers resident, he was a faithful and active communicant of Saint Mary of the Annunciation Church where he was a past president of the former Holy Name Society and a member of the Knights of Columbus, Thomas E. Power Council #1505 for more than 65 years. He was a member of the Marine Corps League, the 2nd Corps Cadets, where he served as spiritual chaplain for many years, and the Yankee Division Vets Association. In addition to his wife, he leaves three children and their spouses, Susan and William Crounse of Newton, NH, formerly of Newburyport, Janice and Edward Peetz of Danvers, and Paul and Tracey Vaillancourt of Fremont, NH, his grandchildren, Michael and Cheryl Crounse, Sarah and Jonathan Clark, Jennifer and Joel DeCoff, Jr., Brian Crounse and his fiancée Amanda Reyes, Alison Crounse and her fiancé Jason Knight, Jamie and Matthew Oddy, and Adam Vaillancourt, three great-grandchildren, Kaitlyn, Nathan, and Abigail, his siblings, Leo, George, and Henry Vaillancourt, Doris Durgan, Claire Deinstadt, and Theresa Putnam, and many nieces and nephews. He was predeceased by his siblings, Albert and Arthur Vaillancourt and Adele Martin and his son-in-law, Stephen Crounse. Fred’s family is grateful for the wonderful and loving care he received during his illness from the staff at both Care Dimensions and the Merrimack Valley Health Center. His Funeral Mass will be celebrated on Monday, January 22, 2018 at 9AM in Saint Mary of the Annunciation Church, 24 Conant St., Danvers. Burial will follow in Annunciation Cemetery, Danvers. Relatives and friends are invited. Visiting hours are Sunday from 2-5PM in C.R. Lyons & Sons Funeral Directors, 28 Elm St., Danvers Square. In lieu of flowers, donation’s in Fred’s name may be made to Saint Mary of the Annunciation Church, 24 Conant St., Danvers, MA 01923 or Holy Redeemer Parish, 4 Green St., Merrimac, MA 01860.

Wilfred A. &#8220;Fred&#8221; Vaillancourt, 92, died Thursday morning, January 18, 2018 following a lengthy illness. He was the loving husband of Helen (Horgan) Vaillancourt, with whom he shared 67 years of marriage. Son of the late Amedee... View Obituary & Service Information

The family of Fred Vaillancourt created this Life Tributes page to make it easy to share your memories.