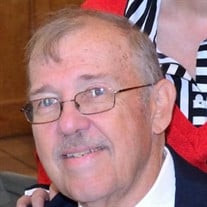 Frank P. Salvo, age 68, of Danvers, died on Friday, May 8, 2015 at Kaplan Family Hospice House in Danvers, after a courageous 10 year battle with cancer. Frank was the devoted husband of Jean F. (Stewart) Salvo for 43 years. He was the son of the late Ralph F. and Catherine D. (Stromeski) Salvo. Frank was a long time resident of Danvers and grew up in Salem. He attended the Salem Public Schools, graduating from Salem High School in 1964. He attended Salem State College, where he earned a Bachelor of Science and a Masters in Education. Frank taught Math, Science, and Driver’s Education at Salem High School over the course of 25 years. After retiring from teaching he entered the real estate industry as a realtor and appraiser. Frank served as President of the Massachusetts Constable Association during the 1980s and was a Danvers town meeting member for many years. He was a long time member of the Polish Russian Lithuanian American Citizens Club, serving as Recording Secretary and Auditor before being elected as President. Frank was an active board member for the Little Ossipee Lake Association in Waterboro, Maine. Frank was hardworking, generous, kind, and had a great sense of humor. He enjoyed spending time with extended family and his many friends. Frank was a devoted grandfather where he especially enjoyed boating, watching football games, and playing cribbage. Among his hobbies and interests, Frank loved designing and building homes including his vacation home in Waterboro, Maine. He enjoyed traveling with his wife and children, the most memorable being his drive cross country with his wife in his 1965 Corvette. Besides his loving wife Jean, he is survived by his children: Christopher Salvo and his wife, Tracie, of Danvers, Carolyn Wilson and her husband, Gregory, of Amesbury, and Jason Salvo and his wife, Christina, of Winchester. Frank also leaves six grandchildren: Josh and Drew Salvo, Bradley and Casey Wilson, and Leo and Gianna Salvo. Frank is also survived by his sisters, Stella Beausoleil of Tucson, AZ and Elizabeth Scaparotti and her husband, Michael, of Byfield, his brother, Thomas Salvo and his wife, Jane Albert, of West Newbury. Frank also leaves many aunts, uncles, cousins, nieces, and nephews. He leaves his childhood friend, Paul Kaminski of East Kingston, NH. His Funeral Mass will be celebrated on Tuesday, May 12, 2015 at 11:30AM in Saint Mary of the Annunciation Church, 24 Conant St., Danvers. Burial will follow in Walnut Grove Cemetery, Danvers. Relatives and friends are invited. Visiting hours are Monday from 4-8PM in C.R. Lyons & Sons Funeral Directors, 28 Elm St., Danvers Square. Donations in Frank’s memory may be made to the Dana-Farber Cancer Institute, P.O. Box 849168, Boston, MA 02284-9168 or the Kaplan Family Hospice House, 78 Liberty St., Danvers, MA 01923. www.LyonsFuneral.com.

Frank P. Salvo, age 68, of Danvers, died on Friday, May 8, 2015 at Kaplan Family Hospice House in Danvers, after a courageous 10 year battle with cancer. Frank was the devoted husband of Jean F. (Stewart) Salvo for 43 years. He was the son... View Obituary & Service Information

The family of Frank P. Salvo created this Life Tributes page to make it easy to share your memories.