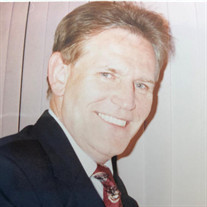 PEABODY - Frank M. Quinn, 75, passed away on April 19, 2020 at Beverly Hospital following a brief illness. He was the loving partner of Rosemary Kenney of Peabody, for over thirty years. Born in South Boston on August 20, 1944, he was the son of the late Charles and Alice (Sharon) Quinn. Frank was raised and educated in South Boston and was proud to be from “Southie.” He still enjoyed visits to Castle Island with his sister, with whom he shared a special bond. He graduated from Boston Technical High School and attended Northeastern University. Frank served our country with the United States Air Force during the Vietnam War and was honorably discharged. He had a career in finance and owned the Consumer Financial Group in Lynnfield. He was a member of the AOH in Peabody and the South Boston Mustangs. Frank was a positive person and always looked on the bright side of things. He was known as the life of the party, he loved singing and karaoke. He enjoyed swimming, chess, puzzles and playing cards, especially poker. He was also an avid reader and music collector. Frank enjoyed television and watching the Patriots. Frank and Rosemary traveled to the Caribbean many times, where he loved to scuba dive. In addition to his partner, Rosemary, he is survived by his daughter and son-in-law, Patti and Darrell Sanders of Danvers, his beloved sister, Eleonor McDougall of Randolph, four grandchildren, Krystal Shores, Grace, Brendan, and Maria Sanders, his former wife and dear friend, Patricia (Pitocchelli) Quinn, as well as several nieces and nephews. A Celebration of Life will be announced at a later date. In lieu of flowers, donations may be made in Frank’s name to the Northeast Animal Shelter, 347 Highland Avenue, Salem, MA 01970. A special thank you to the staff at the Bedford VA.

PEABODY - Frank M. Quinn, 75, passed away on April 19, 2020 at Beverly Hospital following a brief illness. He was the loving partner of Rosemary Kenney of Peabody, for over thirty years. Born in South Boston on August 20, 1944, he was the son... View Obituary & Service Information

The family of Frank M. Quinn created this Life Tributes page to make it easy to share your memories.