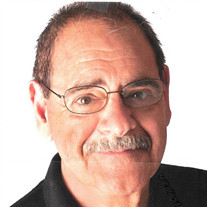 DANVERS – Frank (Frankie) E. Costanzo, 77, passed away on August 1, 2019 in his home. He was the loving husband of the late Marilyn (Malo) Costanzo. He is survived by his two loving children and their spouses, John and Melinda Costanzo of North Reading and Lisa and Jess Hinkle of Connecticut, and his grandson, Jesse. Born in Lynn on November 22, 1941, Frank was the son of the late Emilio and Rose (Catania) Costanzo. He was predeceased by his sister, Grace Thompson of Las Vegas, Nevada. He was raised and educated in Lynn and graduated from Lynn English High School. Frank was a master electrician and owned and operated Minigell Electric in Danvers. He was a Danvers resident for almost 50 years and active within his community. He was a member of the Lions Club, Rotary Club, and the Danvers Touchdown Club, where he volunteered his time and raised funds for numerous local charities. Frank lived life to the fullest. He woke up each morning with a smile on his face. When he walked into a room he lit it up and made everybody he encountered feel special. He was eternally optimistic and always there for his family and friends. He had a great sense of humor and enjoyed a good practical joke. But it was his warmth and ability to make everybody in his company feel good, no matter what else they had going on in their life. He loved vacationing with his family and large circle of friends and was always planning for his next adventure. Frank had a zest for life and enjoyed hosting poker games, meeting old friends for lunch, and occasional trips to nearby casinos. A true original, Frank will always be remembered as the man, the myth, the legend. A Celebration of Life will be held for Frank at 6:30 p.m. on Saturday, August 17, 2019 at the Polish Club, 12 Cheever Street, Danvers. Relatives and friends are invited. In lieu of flowers, donations may be made in Frank’s name to the Danvers Lions Club or the Northeast Animal Shelter, 347 Highland Avenue, Salem, MA 01970.

DANVERS &#8211; Frank (Frankie) E. Costanzo, 77, passed away on August 1, 2019 in his home. He was the loving husband of the late Marilyn (Malo) Costanzo. He is survived by his two loving children and their spouses, John and Melinda Costanzo... View Obituary & Service Information

The family of Frank E. Costanzo created this Life Tributes page to make it easy to share your memories.