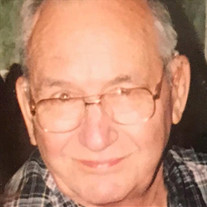 Francis A. Marcheterre, 86, died Saturday, June 2, 2018 at his home surrounded by his loving family. He was the loving husband of the late Carol (Casey) Marcheterre. Born in Salem on September 14, 1931, he was the son of the late Wilfred and Leona (Mallette) Marcheterre. He was raised and educated in Beverly and was a graduate of Beverly High School. Frank served honorably in the U.S. Air Force during the Korean War. Until the time of his retirement, he was employed by the New England Telephone Company. He enjoyed history and reading. He was especially devoted to his grandchildren, who were his pride and joy. He leaves his children, Donna Guilmain and her husband Rodney of Virginia, David Marcheterre and his wife Annemarie of Peabody, Diane Delande of Danvers, Karen Walters and her husband Peter of Danvers, and Joanne Marcheterre of Danvers, his daughter-in-law, Khristina Marcheterre of Danvers, 11 grandchildren, Nathan Guilmain and his wife Trisha, Julie Criner and her husband Drew, Gabrielle, Garrison, and Gregory Marcheterre, Danielle Zenga and her husband Daniel, Rebecca Grady and her husband Edward, Tara Devaney and her husband James, Jessica and Melanie Delande, and Megan Walters, 7 great-grandchildren, two sisters, Claudette Reagan and Joanne Marcheterre, and a brother, Richard Marcheterre. He was predeceased by a son, Michael Marcheterre, and his brothers Donald, Henry, Robert, and Wilfred Jr. His Funeral Mass will be celebrated on Thursday, June 7, 2018 at 9AM in Saint Mary of the Annunciation Church, 24 Conant St., Danvers. Burial will follow in Annunciation Cemetery, Danvers. Relatives and friends are invited. Visiting hours are Wednesday from 4-7PM in C.R. Lyons & Sons Funeral Directors, 28 Elm St., Danvers Square. In lieu of flowers, donations in Frank’s name may be made to Special Olympics, 512 Forest St., Marlborough, MA 01752. www.LyonsFuneral.com.

Francis A. Marcheterre, 86, died Saturday, June 2, 2018 at his home surrounded by his loving family. He was the loving husband of the late Carol (Casey) Marcheterre. Born in Salem on September 14, 1931, he was the son of the late Wilfred and... View Obituary & Service Information

The family of Francis A. Marcheterre created this Life Tributes page to make it easy to share your memories.