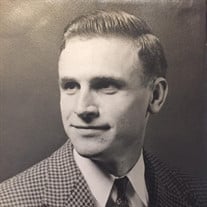 Francis S. Knight, age 98, died Tuesday, April 25, 2017 following a lengthy illness at the Brentwood Rehabilitation & Healthcare Center in Danvers. Born on August 26, 1918, he was the son of the late Augustus Roy and Mary Agnes (Casey) Knight and was raised in Beverly, MA. He was the beloved husband of the late Frances (David) Knight with whom he shared 60 years of marriage. Francis was a 1936 graduate of Beverly High School. Following his graduation, he worked several years in Vermont as part of the Civilian Conservation Corps (CCC), a program enacted under the Emergency Conservation Work Act of 1933 during the Great Depression as part of President Franklin Roosevelt’s New Deal Program. While with the CCC, he took part in the effort to establish a general environmental conservation program in every state and territory in the United States for the protection and development of the country’s natural resources. Following the CCC, Francis began working for the A. C. Lawrence Leather Company in Peabody, MA before being drafted into the U.S. Army Air Corps in 1942. While in the Army, he earned the rank of Staff Sergeant and was an honorably discharged veteran of World War II. During the war, Francis was assigned to the 327th Airdrome Squadron. As part of the 327th, whose mission was to build and establish forward air bases overseas and provide the heavy aircraft maintenance to assist the fighting squadrons while in the air, he was stationed in and around Burma (now Myanmar). As an airplane mechanic, he serviced mainly Curtis Wright (P-40) Aircraft which flew aerial transport missions in the Burmese region throughout the war. Between February and May, 1945, his squadron received Unit Citations for their support of the 1st and 2nd Fighter Squadrons for devastating fighter sweeps against the Japanese Air Power in Burma and Siam. During his years of service, Francis personally received several awards including the Aviation Badge, the Sharp Shooter Carbine Rifle and Good Conduct Medals, the Victory Medal, the Asiatic Pacific Theater Campaign and the American Theater Campaign Ribbons. When Francis returned from the war, he went back to A. C. Lawrence and was employed as a Stationary Engineer there for over 40 years. He was the very last employee to leave when the plant closed its doors. Francis was an excellent gardener and craftsman, loved gadgets and enjoyed spending quality time with his children and grandchildren. He was loved and will be missed by all. Francis is survived by two daughters, Diane and her husband Ronald Costa of Beverly, MA; and Sharyn and her husband Richard Bushby of Casco, ME; and one son, David and his wife Linda of Wakefield, MA. He is also survived by eight grandchildren - Mark Costa and his wife Kellee, and Stephen Costa and his wife Julie, all of Beverly; David Costa and his wife Adrienne of Danvers; Tracy Ferguson and her husband James of Macungie, PA; Kerri Wilcox and her husband Brian of Bel Air, MD; Scott Overberg and his wife Ivanka of Wiesbaden, Germany; Matthew Knight and his wife Lara of Naperville, IL; and Jason Knight of Wakefield; twelve great-grandchildren - Meghan, Brett, Kevin, Hannah, Sean and Michael Costa; Andrew Ferguson; Kevin and Kyle Wilcox; Dylan and Colin Knight; and Evelyn Overberg as well as many nieces and nephews. Francis was also predeceased by five sisters - Beatrice Payne, Ruth Pitzer, Agnes Hathaway, Mary Howard, and June Bouchard and three brothers - Russell, Augustus Earl, and Irving. On behalf of Francis's family, we are forever grateful for the extraordinary care and love shown to him by all the staff at the Brentwood Rehabilitation and Nursing Center. His Funeral Service will be Monday, May 1, 2017 at 10AM in C.R. Lyons & Sons Funeral Directors, 28 Elm St., Danvers Square. Relatives and friends are invited. Visiting hours are Sunday from 3-6PM in the funeral home. Burial is private. In lieu of flowers, donations may be made in Francis's memory to Care Dimensions Hospice, 75 Sylvan Street, Suite B-102, Danvers, Ma 01923. Online donations may be made at www.CareDimensions.org.

The family of Francis S. Knight created this Life Tributes page to make it easy to share your memories.