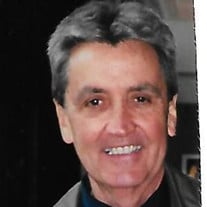 DANVERS- Francis Patrick Devlin, 78, passed away peacefully on March 17, 2018. Frank was born March 31, 1939, in Philadelphia, PA to the late Cornelius and Mary Ellen (Leahy) Devlin. His twin brother, Neil, died on December 31, 2017. He is survived by an aunt, Ann Leahy, of Philadelphia, and several cousins. He is also survived by many dear friends, who joined him in his love of music, gardening, and travel. Frank grew up in Philadelphia and in Wildwood, New Jersey. He received his B.A. from Mount St. Mary’s University, an M.A. from Niagara University, and a Ph.D. from Indiana University Bloomington. Frank taught at the college level for thirty-three years: six at College of the Holy Cross, one at Roger Williams University, and twenty-six at Salem State University. At Salem State, he founded the University’s Writing Center, establishing a training protocol for graduate and undergraduate writing tutors that flourishes to this day. In 1979, The National Endowment for the Humanities selected Frank to participate in the first University of Iowa Institute on Writing. In addition, he taught in an exchange program with Diablo Valley College in California, where he shared the latest research connecting composition theory to classroom practice. Frank’s affinity for good writing made him a valued editor of scholarly works, especially by Salem State faculty, who continued to call on his expertise long after he retired in 2000. A Memorial Service will be held at 11AM on Sunday, April 29, 2018 at C.R. Lyons & Sons, Funeral Directors, 28 Elm St., Danvers. In lieu of flowers, donations in Frank’s memory may be made to VNA Hospice and Palliative Care, Fund Development Office, 1999 Rosewood Drive, Suite 180, Danvers, MA, 01923.

The family of Francis Patrick Devlin created this Life Tributes page to make it easy to share your memories.