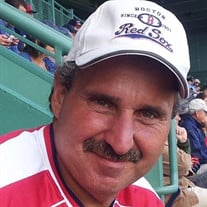 DANVERS- Francesco “Frank” Cobuzzi, 55, peacefully passed away surrounded by his loving family on March 20, 2019. He was the devoted husband of Tricia (Donlon) Cobuzzi with whom he shared almost 17 years of marriage. Born in Danvers on April 23, 1963, he was the son of Maria (Ciruolo) Cobuzzi and the late Rocco Cobuzzi. Frank was raised and educated in Danvers and graduated from Bishop Fenwick High School in 1981. He was a significant part in his families many businesses including, Rocco’s Pizza, Family Variety and Premier Deli before starting his own business Rocky Woods Landscaping and Property Management. Frank was extremely active within his community; he would always lend a helping hand where ever he went. He had been a Friend of Bill W. for twenty five years. He spent his time devoted to his family, his wife and kids, coaching soccer, leading boy scouts, fishing, watching NASCAR and Boston sports teams. He was a man with a big heart and found the most joy from being there for others. In addition to his wife, Tricia and his mother, Maria, he is survived by his children, Michael and Christina and his siblings, Tony Cobuzzi and his wife, Julie of Boston, Don Cobuzzi and his fiancée, Julie Ellis of Danvers and Lena Winston and her husband, Matthew of Hamilton, his sisters-in-law, Cindy Donlon of Danvers and Peg Giles and her husband, Mike of Peabody, his nieces and nephews, Nouelle Ingraham and her husband, Thomas, Morgan and Sophia Cobuzzi, Rebecca and Gabriella Winston, James Ryan Donlon and Benjamin and Mary Giles, many aunts, uncles and loving cousins, for which he had a special bond. His Funeral Mass will be celebrated at 10AM on Monday, March 25, 2019 in Saint Richard Church, 90 Forest St., Danvers. Burial will follow in Annunciation Cemetery, Danvers. Visitation will be held from 2-6PM on Sunday, March 24, 2019 at C.R. Lyons & Sons, Funeral Directors, 28 Elm St., Danvers. In lieu of flowers, donations may be made in Frank’s name to Care Dimensions, 75 Sylvan St, Danvers, MA, 01923 or To Show We Care, 15 Kent Rd, Gloucester, MA, 01930 or Friends of the Danvers Council on Aging, 25 Stone St., Danvers, MA 01923.

DANVERS- Francesco &#8220;Frank&#8221; Cobuzzi, 55, peacefully passed away surrounded by his loving family on March 20, 2019. He was the devoted husband of Tricia (Donlon) Cobuzzi with whom he shared almost 17 years of marriage. Born in Danvers... View Obituary & Service Information

The family of Francesco "Frank" Cobuzzi created this Life Tributes page to make it easy to share your memories.