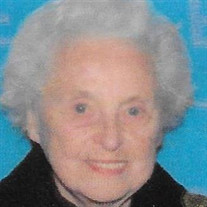 DANVERS- Frances (Staniszewski) Moss, 96, passed away on February 6, 2017. She was the wife of the late John A. Moss. Born in Peabody on December 6, 1920, she was the daughter of Alexander and Mary (Kobierska) Staniszewski. Frances was raised and educated in Peabody and graduated from Peabody High School. She resided in Danvers for many years, where she raised her family. Frances had been employed as a secretary in the emergency room of Salem Hospital. She enjoyed gardening, spending time in Maine and at the beach. Frances was a talented quilter and spent many hours working on her quilts at the Danvers Senior Center. She is survived by her three children, Ann Marie Quinn and her husband, Michael of Ohio, Patricia Moss-Newbury and her husband, Donald Newbury of Methuen and Frances “Cookie” Moss and her husband, Arthur Garrone of Methuen, three siblings, Henry Stanford of Danvers, Florence Piccola of Boxford and Stanley Stanford of CA, four grandsons, Sean, Timothy and Patrick Quinn and Steven Garrone, five great grandchildren, Jacob, Katelyn, Madeline, Andrew and Nathaniel. She was predeceased by three siblings, Alexandra Zwiercan, Lee Hilenski and Alice Paskowski. FUNERAL MASS POSTPONED DUE TO WEATHER, Her Funeral Mass will be now celebrated at 11AM on Tuesday, February 14, 2017 in Saint Mary of the Annunciation Church, Conant St., Danvers. Burial will follow in Annunciation Cemetery, Danvers. Visiting hours are still being held Sunday, February 12th from 3-6PM at C.R. Lyons & Sons, Funeral Directors, 28 Elm St., Danvers. In lieu of flowers, donations may be made in Frances’ name to Care Dimensions, 75 Sylvan St., Danvers, MA, 01923.

DANVERS- Frances (Staniszewski) Moss, 96, passed away on February 6, 2017. She was the wife of the late John A. Moss. Born in Peabody on December 6, 1920, she was the daughter of Alexander and Mary (Kobierska) Staniszewski. Frances was raised... View Obituary & Service Information

The family of Frances Moss created this Life Tributes page to make it easy to share your memories.