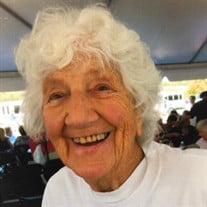 DANVERS- Florence Marion (Pizzo) Robinson, 99, passed away on August 25, 2020 in her home. She was the daughter of the late James and Viola (Crockett) Pizzo. Mrs. Robinson leaves a daughter and son-in-law, Gail and James Monroe of Worcester and a son and daughter-in-law, Gary and Lynne Robinson of Danvers, her grandchildren, Laura Chapman and her husband, Dan of Somerville, Jennifer LeBlanc and her husband David of Georgetown and Nicholas Robinson of N. Chelmsford, a sister-in-law, Norma Pizzo of Amesbury and many nieces and nephews. She was predeceased by her brothers, James and Herbert Pizzo. Florence was born at 10 Lathrop Street in Salem and moved to Brooklyn, New York for over 20 years where she was raised and educated. In 1946, she moved to Beverly where she resided for over 50 years. Mrs. Robinson was employed at the Sylvania Employees Credit Union and years later promoted to human resources as an executive secretary to a vice president of Orsam/Sylvania. During her retirement she worked part-time for Coletti Nursing as a caregiver. She volunteered at the North Shore Music Theatre for seven years and was also a notary public for several years. Mrs. Robinson enjoyed, dancing, traveling, sports, movies, walking, golf, swimming and cross country skiing. She had been a member of the YMCA, Carmel Club, Quarter Century Club, and the Beverly Senior Citizens Club, where she served as a publicity officer. Her Graveside service will be held at 10AM on Friday, August 28, 2020 in Walnut Grove Cemetery, 30 Sylvan St., Danvers. Visitation will be held from 4-6PM on Thursday, Aug. 27, 2020 at C.R. Lyons & Sons, Funeral Directors, 28 Elm St., Danvers. In lieu of flowers donations may be made in Mrs. Robinson’s name to St. Jude Children’s Hospital, 501 St. Jude Pl., Memphis, TN, 38105. Online directions and condolences may be made at www.LyonsFuneral.com

DANVERS- Florence Marion (Pizzo) Robinson, 99, passed away on August 25, 2020 in her home. She was the daughter of the late James and Viola (Crockett) Pizzo. Mrs. Robinson leaves a daughter and son-in-law, Gail and James Monroe of Worcester... View Obituary & Service Information

The family of Florence Marion Robinson created this Life Tributes page to make it easy to share your memories.