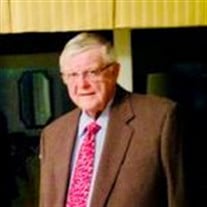 DANVERS- Emery Parsons Todd, Jr. passed away unexpectedly on September 23, 2017 at the age of 82. He was born and raised in Newburyport, the son of Katherine (Jackman) and Emery Parsons Todd, Sr. He attended Newburyport High School and the University of New Hampshire, where he received a Bachelor of Science degree (electrical engineering). He left graduate school and joined the United States Air Force, entering as a second lieutenant and discharged as a captain. After his service, he had a 35 year career at GTE Government Systems in Needham, MA. On January 23, 1960, he married Joan Brideau and moved to Woburn. Together they had two sons, Charles R (Randy) and Richard Emery (Ric) Todd. In 1962, he moved to Danvers, living 44 years at 6 Orrantia Circle. Emery worked to make the town of Danvers a better place. When his boys were little, he volunteered on the PTA, Cub/Boy Scouts (he, himself, was an Eagle Scout) and Little League. After his sons were grown, Emery increased his community involvement. He became a member of the Planned Programming Budget and Evaluation System Committee in the Danvers public schools and chair of the Secondary School Curriculum Review Committee in the late 1970s. From 1980 to 1992 he was elected to the Danvers School Committee, serving 6 years as chair. During his years on the school committee, he oversaw the implementation of Proposition 2.5, introduction of the Gifted and Talented Program, establishment an Education Reserve Fund, revision of the elementary math and science programs (as well as the high school physics program). During these times of monumental change, the school system ran on budget every year. From 1993 to 2001, Emery next was elected to the Danvers Board of Selectmen, serving 5 years as chair. During his tenure, the town’s bond rating was upgraded; the Senior Center, Danversport Park and library renovations were completed on time and on budget; and the town’s water supply and river dredging were improved. In addition to the Danvers School Committee and Board of Selectmen, Emery worked on the Budget Conference Committee, Finance Committee (1992-3), Executive Board (2001-2), New Ballfield Committee, Danvers Historical Society, Touchdown Club of Danvers, and North Shore Philharmonic Board of Directors. In 2002, he was awarded the Baron Mayer Community Service Award. In 2007, Joan and Emery moved to the Villages, Florida. In addition to his love of family and the town of Danvers, Emery had several hobbies. He was an avid golfer. He played high school and American Legion baseball and was a life-long Red Sox fan. He also enjoyed reading, gardening, travel, furniture making and fine food. He generously donated to charities too numerous to mention. Aside from family, he cherished most life-long friends from Newburyport, Danvers, GTE, and the Villages. He greatly appreciated measured thought and dry, Yankee humor. Emery will be missed by many friends and family, as well as others who never knew him personally but benefited greatly from his years of service. He is survived by his wife Joan, now of the Villages, FL; his son Randy (oral and maxillofacial surgeon), his wife Anne (orthodontist), and his grandson David (Princeton student) of Boxford; his son Ric (astonautical engineer), his wife Linda (nurse) and his grandchildren Sonya and Spencer (both students at James Madison High School) of Vienna, Virginia. He is also survived by his brother Robert, wife Gail. A Remembrance Service will be held at 1PM on Saturday, November 25, 2017 at C.R. Lyons & Sons, Funeral Directors, 28 Elm Street, Danvers. The burial is private. In lieu of flowers, donations in Emery’s name can be made to Operation Shoebox, 8360 East Highway 25, Belleview, FL 34420.

The family of Emery Parsons Todd Jr. created this Life Tributes page to make it easy to share your memories.