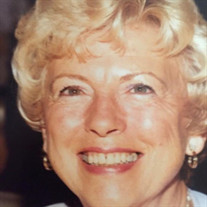 LYNNFIELD/DANVERS— Ella ‘Merrie’ Sullivan, of Lynnfield, MA and Highlands Ranch, CO, passed away, peacefully, after quality time with family, on February 26. Much like her sparkling green eyes, Merrie’s spirit of optimism and strength shined brightly for nearly all of her 104+ years. Born and raised in Revere, MA, on May 2, 1915, Merrie was the eldest of Nick and Margaret Andreottola’s four lovely daughters. While Merrie had ambitions of teaching school children, the depression of the 1930’s led her down a different path to an executive assistant role at Universal Studios, Boston. With the Holy Spirit at work, Merrie crossed paths with a blue eyed Irish-American gent named John Henry Sullivan who frequented Universal Studios with his linen deliveries. Merrie often remarked of John that ‘she had the best’; John and Merrie married in September, 1944, and lived together in Lynnfield for over 50 years. It was a team effort for Merrie and John, and as a woman ahead of her time, Merrie, managed the finances for John’s Mutual Towel & Linen Supply Company. Together they raised their two beautiful and talented children, Karen and Jack. Together, Merrie and John enjoyed golfing, playing bridge, socializing at Bear Hill Country Club and spending time with extended family. Merrie enjoyed some of her retirement years at Brooksby Village in Peabody before moving to CO to be with family. Merrie’s youthful spirit and faith was an inspiration to all who met her. She was still dancing at 104 and always enjoyed a good laugh. Merrie is predeceased by her sisters Josephine Campatelli of Lynn and Agnes ‘Sandy’ Sullivan of SC and her daughter Karen Sullivan Decembrele of Needham. Merrie is survived by her son, Jack Sullivan of Denver, CO; her sister, Evelyne Kelly of Overland Park, KS; 5 grandchildren- Stacey Decembrele, Blair Decembrele Heitmann, John H. Sullivan III, Babette Puebla de Male, Tyler Sullivan; and three great grandchildren. Merrie has also been blessed with many nieces, nephews and a large extended family through her sisters, including Joan Ciampa of Peabody, Lois Goral of Lynn, Fred Campatelli of Beverly; Robin Sumple of Overland Park, KS, Arthur Sullivan of Whiting, NJ and Kerry Sullivan of Gardner, MA. Her Funeral Mass will be celebrated at 10AM on Saturday, March 14, 2020 in Our Lady of Assumption Church, 17 Grove St Lynnfield. Burial will follow in Puritan Lawn Memorial Park, Peabody. Visitation will be held on Friday from 5-8PM at C.R. Lyons & Sons, Funeral Directors, 28 Elm St., Danvers. In lieu of flowers, donations may be made to Memorial Sloan Kettering/ Cycle for Survival in remembrance of Karen Sullivan Decembrele. To donate, visit “Karen’s Crusaders” Cycle for Survival webpage: http://mskcc.convio.net/goto/KarensCrusaders Gifts can also be mailed to: Cycle for Survival | Memorial Sloan Kettering Cancer Center P. O. Box 27432 New York, NY 10087-7432 **Check memo: "Cycle for Survival - Team Karen's Crusaders": honoring Karen Sullivan Decembrele

The family of Ella "Merrie" Sullivan created this Life Tributes page to make it easy to share your memories.