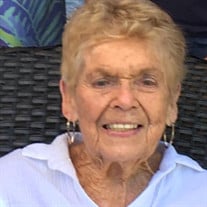 NEWBURYPORT- Elizabeth M. "Betty" (Pierce) Carter, 91, passed away on December 3, 2020 in Kaplan Family Hospice House. She was the wife of the late Richard F. Carter. Born in Peabody on June 26, 1929, she was the daughter of the late Philip and Marie (Doherty) Pierce. Betty was raised and educated in Peabody and graduated from Peabody High School. She raised her family in Danvers and had lived in Newburyport for the past fifteen years. Betty had been employed at the former Jade Tree in Danvers. Through the 80-90’s she was well known for her 5 mile treks through Danvers. She was affectionately known as Nana Betty to many, in addition to her grandchildren. Betty enjoyed cooking and looked forward to making her dinners every night. She loved parties and anticipated our large family gatherings, especially Christmas Eve. She was witty, funny and feisty. She enjoyed her nightly martini...though she NEVER had more than one! She also was a “sun worshiper” and spent many days in the sun on her boat in the Beverly Harbor Marina. Betty was an avid reader. She was also interested in her family’s genealogy and she loved listening to the music of Frank Sinatra, Tony Bennett, and Willie Nelson. She is survived by her children, Michael Carter of FL, Karen “Casey” Peicott of Newburyport, Susan Gieras of Danvers, Maureen Hanley and her husband Derek of ME, David Carter and his wife Mary of CA and Stephen Carter and his wife Heather of Peabody, her grandchildren, Joe Peicott, Carly Eslie, Kyle, Brett and Kristen Gieras, Dana Hayes, Connor Hanley, Hailey and Cameron Carter, Matt Remon, Nick Allen, Chris Vasa, Stephen and Victoryia Carter and Makhaila Olson, three great grandchildren, Theo Hayes, Joey Peicott and Ava Allen, her sister-in-law, Sandra Pierce and many nieces and nephews. She was predeceased by her siblings, Phil Pierce and Ruth Linehan. Due to the pandemic her funeral service will be private. In lieu of flowers donations may be made in Elizabeth’s name to Huntington’s Disease Society of America, PO Box 14, Chelmsford, MA, 01824.

NEWBURYPORT- Elizabeth M. "Betty" (Pierce) Carter, 91, passed away on December 3, 2020 in Kaplan Family Hospice House. She was the wife of the late Richard F. Carter. Born in Peabody on June 26, 1929, she was the daughter of the late Philip... View Obituary & Service Information

The family of Elizabeth M. Carter created this Life Tributes page to make it easy to share your memories.