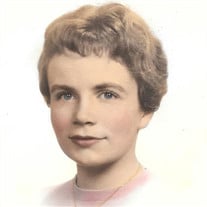 PEABODY- Eleanor M. (Cranney) Russell, 73, passed away on February 14, 2017 at home. She was the beloved wife of the late Thomas Flynn Russell. Born in Peabody on July 14, 1943, she was the daughter of the late Milton and Loretta (McHugh) Cranney. Ellie was raised and educated in Peabody and graduated from Saint John High School. She attended Salem Hospital School of Nursing and graduated from Lynn Hospital Laboratory Technology Program. Throughout her professional career, Ellie worked at several hospitals and Doctor’s offices in the North Shore area. She was widely acknowledged by her patients for her kindness and compassion. Ellie was a generous and caring soul, and loved helping others whenever possible. She was an avid animal lover; her most recent four- legged friend was her faithful companion, Mikey O’Flynn. Ellie was the much-loved sister of Mary Nolan and her husband, Thomas of Topsfield, Michael Cranney and his wife Anne, of Danvers, the late Joann Murphy and her husband Jack of Hamilton, Patrick Cranney and his wife, Judith of Beverly, Brian Cranney and his wife, Susan of Peabody, Lori Kline and her husband, Terry (Buzz) of Kelowna BC and Ted Cranney and his wife, Nancy of North Andover. She is also survived by her devoted goddaughter and niece, Noni Kline, as well as several nieces and nephews; Michael and Greg Cranney, T.J. Murphy, Zak and Malley Kline, Matt, Libby, Maggie and Sarah Cranney. Ellie is also grateful to her nephew John Russell for his care and assistance over the last few years. Ellie’s twinkling blue eyes, fun loving spirit, patience, generosity, and unconditional acceptance of others will live on in the hearts of all who loved her, as Tom often said, “Who wouldn’t love you, Ellie?” Ellie’s Funeral Mass will be celebrated at 9AM on Monday, February 20, 2017 in Saint Mary of the Annunciation Church, 24 Conant St. Danvers. Visitation will be held on Sunday from 3-6PM at C.R. Lyons & Sons, Funeral Directors 28 Elm Street Danvers. The burial is private. In lieu of flowers donation may be made to the Society of Saint Vincent De Paul, 24 Conant Street, Danvers, MA, 01923 or MSPCA at Nevins Farm, 400 Broadway, Methuen, MA, 01844.

PEABODY- Eleanor M. (Cranney) Russell, 73, passed away on February 14, 2017 at home. She was the beloved wife of the late Thomas Flynn Russell. Born in Peabody on July 14, 1943, she was the daughter of the late Milton and Loretta (McHugh) Cranney.... View Obituary & Service Information

The family of Eleanor M. Russell created this Life Tributes page to make it easy to share your memories.