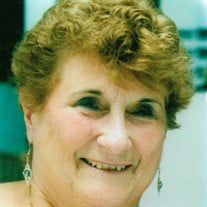 Eleanor Frances Ross, age 90, shed the surly bonds of Earth on Sunday, July 12, 2020 and flew off into a bright new sunrise on gossamer wings. She was born August 6, 1929 to Anne and Pasquale Martini of Woburn, the fourth of five children. She was predeceased by her siblings Clara Day, Ralph Martini, and John Martini, and is survived by her younger sister Patricia McCuish. She was the widow of Edward M. Ross of Danvers who died in 1972, and has been the long time companion of George McCarrier of Saugus. She is survived by her children: David McKenna of Danvers; Debbie Beaubier of New Hampshire; Merry and Paul Brooks of Boxford; and Cynthia Ouellette of Connecticut and her “other Daughter” Michelle McCuish of Maine; Grandchildren: Jason, Zachary and Jacob Beaubier; Luke Osmundson; Cathy Sorofman, James, Jeffrey, Christopher and Garrett Brooks ; and Dorothy Piper and Tony Donnaroma; and many great-grandchildren, and one great-great-grandson, born last February. She moved to Danvers in 1962 when she married Ed Ross and joined him in the Family business, and helped to bring the care of the Jewish Cemeteries of the North Shore into a professional endeavor of proper record keeping and care until Ed’s sudden passing in 1972, when she assumed the mantle of leadership and she and her son David continued to build on the family legacy until her retirement in 2000, when David followed in their footsteps. She also served as the first woman President of the Massachusetts Cemetery Association. Always active in her community, she is a long-time member of Kiwanis, served many years as a Town Meeting Member, served on the Danvers Zoning Board of Appeals, applying sound wisdom to balance the rights of property owners and their neighbors, and a stint on the Downtown Sign Review Committee and the Friends of the Danvers Council on Aging. Ever active, she played on the Woburn High Girls basketball team, then took up bowling, first candlepin, then ten pins; enjoyed deep-sea fishing; was an avid skier from the age of 32 until she was 81 (and her doctors forced her to quit) skiing all over the US, Canada and Europe; and traveling as well to the Caribbean, Alaska, Europe and China. She also loved ballroom dancing with her companion George. At the age of 88, when back problems had confined her to the use of a walker and she moved into the Lindens Assisted Living Apartments, she entered the Wish of a Lifetime Foundation contest, saying she would love to go flying down the side of a snow covered mountain and feel the cold wind in her face one more time. The Foundation was ironically founded by Olympic downhill skier, Jeremy Bloom, who said, “She’s our girl!”. They flew her to Colorado, where she immediately succumbed to altitude sickness, and spent her first night in the hospital getting stabilized. When they released her at 3am her trip guide said I know you’re not up to skiing today, to which she replied, “I didn’t fly all this way to lie in a hotel room. Let’s get going!” So four hours later they fitted her into an adaptive ski sled, and took her down the side of a 12,000 foot peak, yelling for sheer joy at the rush of the frigid air on her face. (see “Ellie’s Excellent Adventure” on YouTube). However, time is a cruel master, wearing down even the strongest Oak in the forest, and eventually even the mighty mountains fall into the sea. But Ellie lived her life on HER terms, standing tall (even at 4’8 ½”) against every obstacle the Fates threw in her path. Always a leader, it didn’t take her long to “Take charge” at the Lindens, making sure things were done the way SHE wanted them, just as she did all her life. All I can say is, “St. Peter, I hope you’re READY for this one.” And she’s off on her next adventure. A graveside Service will be held at noon on Thursday, July 16, 2020 at Puritan Lawn Memorial Park, Lake Street, Peabody, for all who wish to attend. Visiting hours are Wednesday, July 15, 2020 from 4-6PM in C.R. Lyons & Sons Funeral Directors, 28 Elm St., Danvers Square. Attendees are required to wear face coverings, practice social distancing, and are respectfully asked for no physical contact with the family. A memorial Mass will be held at some later date, when the Covid scourge has been brought under control. In Lieu of flowers, please make a contribution in Ellie’s memory to the Danvers Kiwanis Foundation Scholarship Fund, P.O. Box 92, Danvers, MA 01923 or the Wish of a Lifetime Foundation, 110 16th Street, Ste. 406, Denver, CO 80202. For directions or to leave a message of condolence, please visit www.LyonsFuneral.com. To see some of Ellie's amazing adventures, click the links below: https://www.youtube.com/watch?v=jYk38bMo3gE https://www.youtube.com/watch?v=J494R_Xeyys https://wishofalifetime.org/wish/eleanor-skis-keystone-slopes-olympic-athlete-jeremy-bloom/

Eleanor Frances Ross, age 90, shed the surly bonds of Earth on Sunday, July 12, 2020 and flew off into a bright new sunrise on gossamer wings. She was born August 6, 1929 to Anne and Pasquale Martini of Woburn, the fourth of five children.... View Obituary & Service Information

The family of Eleanor F. Ross created this Life Tributes page to make it easy to share your memories.