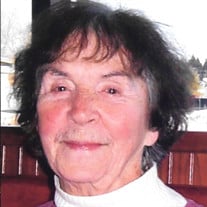 DANVERS- Eleanor A. (Addis) Latawiec died peacefully at her home on Wednesday, May 15, at the age of 94. She was the wife of the late John J. Latawiec, to whom she was married for 51 years, and the beloved mother of four daughters. Born in Allamuchy, N. J., she was the daughter of Edward Addis and Gladys Estelle Addis of Sussex, N.J. As a young bride, she moved to Salem, Mass., where her husband worked at the Pequot Mills. In 1946 they bought a home in Danvers, where she lived for over 70 years. As a young mother, she immersed herself in her children’s activities. An accomplished seamstress, she enjoyed sewing costumes for her daughter’s dance recitals. She was a Girl Scout leader and officer for many years, at one time serving as cookie chairman for the entire region. A great lover of nature, she enjoyed leading tours at the Audobon Sanctuary in Topsfield and hiking at Greenbelt reservations. She was also a proud member of the League of Women Voters in Danvers. Eleanor had a lifelong passion for dancing. She and John were avid square and round dancers, belonging to several clubs on the North Shore and traveling to conventions in other states. She especially enjoyed helping new club members become more confident dancers. She served as recording secretary of the North Shore Square and Round Dance Association for several years. She also held a variety of interesting jobs throughout her life. She worked in the fashionable hat department of Jordan Marsh in the 1960s. When her children were young, she was a lunch monitor in their elementary school and waitressed at several North Shore landmark restaurants, including The Village Green, The Century House and Augustine’s. After completing a nutrition course, she worked as a dietician’s aide at Shaughnessy Rehab in Salem. She retired from the food service unit of Gordon College in Wenham in 1995. A devoted lifelong learner, Eleanor embraced new interests in her retirement. She became an accomplished artist, participating in shows with both the Danvers and Middleton art associations. Always a voracious reader, she honed her poetry skills as a member of the Massachusetts State Poetry Society and local Wordcrafters poetry group. Eleanor moved to Sunrise at Gardner Park assisted living in Peabody in 2018. Her family is very grateful to her many friends there for the care and companionship that brightened her final days. She was the beloved mother of four daughters, JoAnn Fossa of Beverly, the late Barbara Roberts of Punta Gorda, Florida, Francesca Latawiec of Center Barnstead, N.H., and Marjorie O’Leary of Kingston, N.H., as well as her “son” (in-law) Kevin O’Leary. She leaves seven grandchildren: Carl Fossa of Stowe, Mass., Joseph Fossa of Essex, Mass., John Fossa of California, Christopher Fossa of Danvers, Mass., and Frank, Amanda (Sparks) and Jennifer Roberts, formerly of Peabody, as well as 16 great grandchildren. Her Funeral Mass will be celebrated at 9AM on Monday, May 20, 2019 in Saint Mary of the Annunciation Church, 24 Conant St., Danvers. Burial will follow in Walnut Grove Cemetery, Sylvan St., Danvers. Visitation will be held from 4-7PM on Sunday, May 19, 2019 at C.R. Lyons & Sons, Funeral Directors, 28 Elm St., Danvers. In lieu of flowers, donations may be made to the Trustees of Reservations online at http://www.thetrustees.org/donate/honorary-and-memorial-gifts/.

DANVERS- Eleanor A. (Addis) Latawiec died peacefully at her home on Wednesday, May 15, at the age of 94. She was the wife of the late John J. Latawiec, to whom she was married for 51 years, and the beloved mother of four daughters. Born in... View Obituary & Service Information

The family of Eleanor A. Latawiec created this Life Tributes page to make it easy to share your memories.

DANVERS- Eleanor A. (Addis) Latawiec died peacefully at her home...