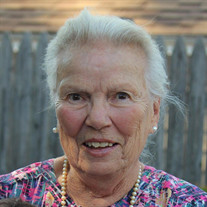 Eleanor Pope Ammen, 90, passed away on August 5, 2019 surrounded by the love and support of her dedicated family. Born in Cambridge on May 2, 1929, she was the daughter of the late Roger and Marjorie (Hart) Pope. She was raised in Swampscott and was a graduate of the Walnut Hill School in Natick. She would receive her bachelor’s degree from Wellesley College in 1950 and as a young mother, returned to school where she earned a master’s degree in library science from Simmons College in 1969. Mrs. Ammen was employed as a law librarian in Boston for many years and as a librarian at the Abbott Public Library in Marblehead. A resident of Marblehead for many years, she resided in Avon, CT for over thirty years. There she was a longtime member of the Town and County Club, serving on various committees and as president from 1999-2001. She was a board member and past president of the Avon Free Public Library and coordinated the move from the previous library to its new structure. She was also active in the Hartford area Wellesley Club and the Hartford Symphony Volunteer Association. She and her husband met in her freshman year at Wellesley. Fifty-eight years later they were reunited and married almost fourteen years ago. They enjoyed wintering for many years at the Hualalai Resort in Hawaii and more recently at the Ocean Reef Club in Key Largo, FL. They spent holidays and summers in Marblehead and Cotuit, Massachusetts. An avid reader, Mrs. Ammen also enjoyed travel, golf, and skiing, and was a member of the Tedesco Country Club. She and her husband are members of the Weston Golf Club, and the Algonquin Club of Boston. She leaves her husband, David L. Ammen, three children, David Switzer and his wife Laura of Florida and Katherine Pelletier and her husband Joseph of Danvers, and Karen Gelband and her husband Ned of Florida, her step-children, Jonathan Ammen and his wife Heather of Lincoln and Julia Breneiser and her husband Jeffrey of Pennsylvania, her grandchildren, Sarah Pazdziorny and her husband Brian, Rachael Novello and her husband Brian, Hannah Pelletier and her fiancé Troy Perry, Daniel Switzer and his wife Jerolyn, and Emma Claire Switzer, her step-grandchildren, Avery and Durst Breneiser and Breylen Ammen, and six great-grandchildren, Charlie, Eleanor Pope, Georgia, Samuel Walter, Lucas, and Olivia. She was predeceased by her son Jonathan Pope Switzer, her husband Walter Abel, and her siblings Louise Southwick and John Pope. A celebration of Mrs. Ammen’s life will be held on Saturday, August 17, 2019 at 4:00 p.m. at the Tedesco Country Club, Tedesco St., Marblehead. In lieu of flowers, donation may be made to Wellesley College, 106 Central St., Wellesley, MA 02481 or the Alzheimer’s Association, 309 Waverley Oaks Rd, Waltham, MA 02452.

Eleanor Pope Ammen, 90, passed away on August 5, 2019 surrounded by the love and support of her dedicated family. Born in Cambridge on May 2, 1929, she was the daughter of the late Roger and Marjorie (Hart) Pope. She was raised in Swampscott... View Obituary & Service Information

The family of Eleanor Pope Ammen created this Life Tributes page to make it easy to share your memories.