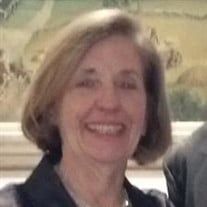 Elaine M. (Sirois) Doyle, B.S.,R.N.,74, died June 18, 2015 at Kaplan House, Danvers, MA after living for the past 18 years in Intervale, NH. She was the beloved wife of John J. Doyle, Jr., with whom she shared 51 years of marriage. Elaine and John raised their daughters in West Peabody, MA and North Conway, NH. Born in Danvers on December 12, 1940, she was the daughter of the late Joseph and Germaine (Roy) Sirois. She was raised and educated on the North Shore. She was a graduate of Our Lady of Nazareth Academy, Wakefield, MA and a 1962 graduate of the Boston College School of Nursing. Elaine was employed as a nursing educator early in her career, at several hospitals on the North Shore. She taught nursing at the former Lynn Hospital School of Nursing, former Salem Hospital School of Nursing, and North Shore Community College. She was also employed at Hunt Hospital, Danvers, MA, PHCS Inc., Lexington, MA, Electric Insurance, Beverly, MA and Alicare, Salem, NH. She was an active nurse in the insurance industry until she became sick in April 2014. Elaine enjoyed all the seasons. Spring was a time for tracking the arrival of humming birds to the North Country and planting gardens. Summers were spent at West Beach, hosting picnics for family and friends in North Conway, having campfires in the yard and spending days at Story Land with her grandchildren. Fall was time for walking in the woods, telling “log stories” and harvesting herbs for winter cooking. Winters in North Conway were filled with skiing, snowshoeing and apre ski gatherings. There was always family and friends to enjoy time with in her home. She was an enthusiastic skier and spent many happy winters at Cranmore Mountain skiing with her family and the Golden Gliders. She was also an accomplished knitter and enjoyed needlework crafts, many of which decorate her family’s home. Elaine had a strong faith which carried her through many challenges. She was a member of the Pastoral Council at Our Lady of the Mountains, North Conway, NH and during her illness received spiritual support and comfort from family and friends and the Outreach Center at Our Lady of the Miraculous Medal Parish, Hampton, NH. In addition to her husband, she leaves her daughter, Marie Doyle of Seabrook, NH, her son-in-law, Thomas Ellis of Stratham, NH, four Ellis grandchildren, Katie, Roger, Hannah, and Michael, her sister, Claire Foley, four brothers, Joseph, Edward, Henry, and Richard Sirois, and many nieces and nephews. She was the loving mother of the late Claire Ellis and the sister of the late Therese Sirois. Elaine’s family wishes to thank the caregivers from Kaplan House and Rockingham VNA that cared so compassionately for Elaine also, family and friends from near and far that visited and sent cards and prayers, all of which is gratefully appreciated by the family. Her Funeral Mass will be celebrated on Wednesday, June 24, 2015 at 9AM in Saint Richard Church, 90 Forest St., Danvers. Burial will follow in Annunciation Cemetery, Danvers. Visiting hours are Tuesday from 4-8PM in C.R. Lyons & Sons Funeral Directors, 28 Elm St., Danvers Square. Donations may be directed to Tin Mountain Conservation Center, 1245 Bald Hill Rd., Albany, NH 03818, Rockingham VNA, 137 Epping Rd, Exeter, NH 03833 or the charity of your choice. www.LyonsFuneral.com.

The family of Elaine M. Doyle created this Life Tributes page to make it easy to share your memories.