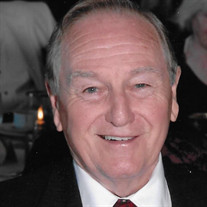 DANVERS- Edwin James Alexander, Jr., 87, passed away peacefully on May 7, 2021. Jim was born in Boston on June 30, 1933 and was the son of the late Edwin and Helen (Hirtle) Alexander. He was raised and educated in Dedham. Jim earned a degree in Mechanical Engineering from Wentworth Institute of Technology and also a degree in Chemistry from Northeastern University. He had a long career as a research scientist and was employed at M.I.T., GTE Sylvania and Osram. One of his early passions was roller skating, where he enjoyed participating in yearly shows. It was during this time at the rink that he met his wife, Joan. During their 63 years of marriage he spent summers on Merrymeeting Lake in NH and Thompson Lake in Maine, taking pleasure in boating, fishing and water skiing with his family. He and Joan also took many trips travelling the world, exploring and experiencing the local cultures and cuisine. These trips included Europe, China and the Caribbean. At home, Jim took great pride in his home and could fix anything around the house. His lifelong love of boating and cars often found him fishing off the coast of the North Shore and frequenting local car and boat shows. He greatly cherished spending time with his family and his dogs, B.G., Abigale and Penny. In addition to his wife, Joan, he is survived by his three children, Lynne Wholley of Merrimac, James Alexander and his wife, Barbara, of Rowley and Glenn Alexander and his wife, Kimberly, of Sandy Springs, GA. He also leaves behind a half sister, Gladys Trainor and her husband, Charles, of Portland, Maine. Jim will also be greatly missed by his 6 grandchildren, Taylor, Ross, Eric, Brian, Danielle and Grant and his 3 great grandchildren Mila, Elena and Hendrix. The family would like to extend their sincere gratitude to long time caregivers, Debra and Butch from the Visiting Angels organization and Care Dimensions for their kindness and compassionate care over the past few years. His funeral service will be held privately. In lieu of flowers, expressions of sympathy may be made in Jim’s name to Care Dimensions, 75 Sylvan St., Danvers, MA, 01923.

DANVERS- Edwin James Alexander, Jr., 87, passed away peacefully on May 7, 2021. Jim was born in Boston on June 30, 1933 and was the son of the late Edwin and Helen (Hirtle) Alexander. He was raised and educated in Dedham. Jim earned a degree... View Obituary & Service Information

The family of Edwin James "Jim" Alexander created this Life Tributes page to make it easy to share your memories.