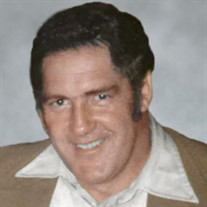 DANVERS- Edward A. LeBlanc, 89, passed away on May 15, 2019 in Addison Gilbert Hospital. He was the loving husband of Patsy (Reed) LeBlanc with whom he shared sixty-seven years of marriage. Born in Fitchburg on September 15, 1929, he was the son of the late Tilmon and Armezine (Belliveau) LeBlanc. Edward spent his early years in Canada and moved to Lynn when he was sixteen years old. He served our country with the United States Army achieving the rank of Master Sergeant during the Korean War and was honorably discharged after six years of service. Edward and Patsy settled in Danvers, where they raised their family. Edward owned several local businesses including Western Auto and Walter B. Kendall Propane Company before becoming a real estate developer. He enjoyed dancing with his wife and won several dance competitions. He also enjoyed spending time with his family and especially loved the large family gatherings at his cottage on Balch Lake in New Hampshire. Ed and Patsy spent many retirement winters in Cocoa Beach, Florida. Edward was always ready to jump in to help family and friends, always generous with his time. He was a member and Grand Knight of the Middleton Council of Knights of Columbus. In addition to his wife, Patsy, he is survived by his sons, Edmund LeBlanc and his wife Judy of VA, David LeBlanc and his wife, Susan of FL and Gerry LeBlanc and his wife, Sara of Danvers, his grandchildren, Jenelle, Austin, Derek, Tyler and Alexis. His siblings, Florence Bennett, Theresa Bresnahan, Lucille and Bob Vautour, Berthe Gallant, Paul LeBlanc and Romeo and Huberte LeBlanc. He was predeceased by five siblings, Rose-Marie Deschambault and, Emery, Louis, Alonzo and Fernand LeBlanc. He was a loving father, grandfather, uncle and friend, who will be missed by all who knew him. His Funeral Mass will be celebrated at 9:00AM on Tuesday, May 21, 2019 in Saint Richard Parish, 90 Forest St., Danvers. Burial will follow in Annunciation Cemetery, Danvers. Visitation will be held from 4-7PM on Monday, May 20, 2019 at C R Lyons & Sons, 28 Elm St, Danvers.

DANVERS- Edward A. LeBlanc, 89, passed away on May 15, 2019 in Addison Gilbert Hospital. He was the loving husband of Patsy (Reed) LeBlanc with whom he shared sixty-seven years of marriage. Born in Fitchburg on September 15, 1929, he was the... View Obituary & Service Information

The family of Edward A. LeBlanc created this Life Tributes page to make it easy to share your memories.