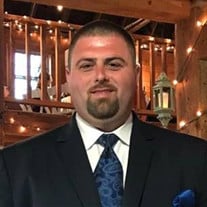 Dustin N. Farrell, 32, beloved son of Charles Farrell and his wife Michelle and Robin (Lewis) Farrell and her companion Ted Mscicz, died December 25, 2018. Following three years of sobriety, he lost his life to a long struggle with addiction. Born in Danvers on April 2, 1986, he was raised and educated in Danvers, where he enjoyed playing youth sports. In recent years, he was employed in landscaping and construction. Dustin was a loving and dedicated friend to everyone. He had a huge, generous heart and would do anything to help the people around him. He was a cherished member of the local AA community. He was also an avid Boston sports fan, and especially loved the Bruins and Patriots. In addition to his parents, he leaves his loving brother, Derek Farrell, his step-sisters, Sydney Bartlett and her husband P.J. and Shylah Bates, his grandparents, Bunky & Karen Lewis, his aunts and uncles Kathy & Peter Armstrong, Nancy & Arthur Francis, Kevin Farrell & Andrea Kennedy, Kerry & Shannon Lewis, Todd Lewis, and Jodi (Welenc) Farrell, his cousins, Keith, Matt, Leanne and Abby, Alli, and Riley, his step-grandparents, Pauline & B.T. Tremblay, his extended family and a host of friends. He was predeceased by his grandparents, James & Shirley Farrell. His Funeral Mass will be celebrated on Monday, Dec. 31, 2018 at 9AM in Saint Mary of the Annunciation Church, 24 Conant St., Danvers. Burial will follow in Annunciation Cemetery, Danvers. Relatives and friends are invited. Visiting hours are Sunday from 3-6PM in C.R. Lyons & Sons Funeral Directors, 28 Elm St., Danvers Square. In lieu of flowers, donations in Dustin’s memory may be made to the American Cancer Society, 3 Speen St., Framingham, MA 01701.

The family of Dustin N. Farrell created this Life Tributes page to make it easy to share your memories.

Dustin N. Farrell, 32, beloved son of Charles Farrell and his...