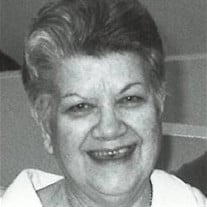 Dorothy R. (Racki) Reynolds, 78, died Thursday morning, March 17, 2016 at Beverly Hospital with her family by her side. She was the loving wife of Gordon M. Reynolds, who predeceased her in 2000. Dottie was born in Chelsea on July 17, 1937, she was the daughter of the late Michael and Frances (Kectic) Racki. She was raised and educated in Chelsea and was a graduate of Chelsea High School. Dottie lived most of her adult life in Salem but in recent years made her home in both Danvers and Beverly. Her second family were the people of Harborlight House in Beverly where she made many friends and enjoyed a good life. She was employed for many years as a cashier for Stop & Shop in North Beverly, and her contagiously cheerful and friendly personality endeared her to her colleagues and customers alike. It was common to see a longer line of customers waiting to go through her checkout just to see her smiling face and exchange kind words. She loved playing bingo and trips to Foxwoods, and was devoted to her grandchildren. She leaves three daughters, Debra Kelly of Wakefield, Susan Cunningham of Danvers, and Gail Surpitski and husband Stephen of Ipswich, three grandchildren, Patrick Cunningham, Danielle Surpitski, and Thomas Surpitski, two sisters, Stella Lewis and Irene Blasi, and many nieces and nephews. She was predeceased by two siblings, Anna Lipinski and Michael “Sonny” Racki. Visiting hours are Monday, March 21, 2016 from 4-8PM in C.R. Lyons & Sons Funeral Directors, 28 Elm St., Danvers Square. Her funeral service will be Tuesday, March 22, 2016 at 10AM in the funeral home with burial in Puritan Lawn Memorial Park. A reception in her honor will follow at Spinelli’s Lynnfield.

Dorothy R. (Racki) Reynolds, 78, died Thursday morning, March 17, 2016 at Beverly Hospital with her family by her side. She was the loving wife of Gordon M. Reynolds, who predeceased her in 2000. Dottie was born in Chelsea on July 17, 1937,... View Obituary & Service Information

The family of Dorothy R. Reynolds created this Life Tributes page to make it easy to share your memories.