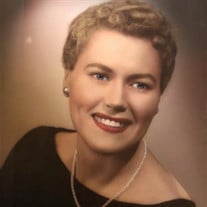 Dorothy Jean (Sproul) McGrath, 92, of Wrentham, Massachusetts passed away peacefully with her loving family beside her on September 1, 2019 at the Maples Rehabilitation and Nursing Center located in Wrentham, Massachusetts. Dorothy was born and raised in Saugus by her parents Alvin F. Sproul, Jr. and Helen (Estes) Sproul. She graduated from Saugus High School in 1944 as a top member of her graduating class. She went on to earn a degree in teaching at Salem Teachers College. She also earned an accounting certificate from the Bentley School of Accounting and Finance. After graduating college, Dorothy moved to Washington D.C. and served in the U.S Naval Air Force Reserve. Dorothy held bookkeeping positions at General Electric in Lynn and the Charlestown Navy Yard. Later in life she worked part-time as an administrative assistant at Eaton Corporation. Dorothy married her beloved husband Martin F. McGrath in 1957, moved to Ipswich and raised four children. As her children graduated high school Dorothy and Martin moved to Danvers and spent winters in Deland Florida with family and friends. Dorothy and Martin traveled extensively with Dorothy’s sister Virginia and her husband Earl. They all enjoyed many cruises and vacations abroad. Dorothy was an avid reader and a history buff. She enjoyed crossword puzzles and exercising at the Danvers Senior Center in later years. Most of all, Dorothy cherished her family and enjoyed spending time with her parents, siblings, children and grandchildren. Martin predeceased Dorothy in 2000. Dorothy is survived by her sister Virginia Cupp of Muscoda, Wisconsin, and three of her four children, Martin McGrath and his wife Pam of Wrentham, MA, Brian McGrath and his wife Leslie of Haverhill, MA and Amy (McGrath) Cain and her husband Cliff of Mansfield, MA. She is predeceased by her beloved son David M. McGrath who passed in 2004. She is survived by her cherished grandchildren, Kate (McGrath) Klein, Michael McGrath, Hannah McGrath, Connor McGrath, Holly McGrath and Benjamin Cain. Visitation will be held from 5-8PM on Tuesday, September 10, 2019 at C.R. Lyons & Sons, Funeral Directors, 28 Elm St., Danvers. All other services are private. In lieu of flowers donations may be made in Dorothy’s name to Dana-Farber Cancer Institute, P.O. Box 849168, Boston, MA 02284-9168.

The family of Dorothy Jean McGrath created this Life Tributes page to make it easy to share your memories.