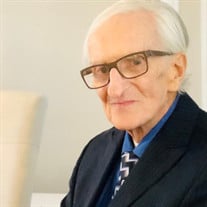 Peabody – Donald W. Freeman, 84, passed away surrounded by his family on May 7, 2020. He was the husband of the late Carol Ann (McLaughlin) Freeman with whom he was married to for 52 years. Born in Salem on December 13, 1935, he was the son of the late Vincent Freeman and Bessie (Whitman) Freeman. He was raised and educated in Beverly and graduated from Beverly High School. Donald served our country with the United States Army during the Korean War. Donald had been a supervisor for Vincent’s Potato Chip Company for many years. He also had been an accountant for his family’s gas stations. Donald loved spending time with his family. He had a heart of gold and could light up any room with his smile and good humor. He would look forward to the drives in winter to Florida and spend his summers either in North Conway or the family home in Maine. He enjoyed the outdoors bird watching and especially long walks in the woods with family. Donald was an avid golfer and a huge sports enthusiast. He would keep stats on all his favorite New England sports teams and could recite stats like a pro. He loved long drives with his wife and children. He is survived by his five children, Colleen Freeman of Merrimac, Donald Freeman Jr of Peabody, Charles Freeman of Berlin, Doreen Gardner and her husband Marc of Peabody, and Charlene Guidi and her husband Richard Guidi of Peabody, his grandchildren, Brad, Heather, Tayla, Jonathan, Thomas, Juliana, Lexi, Kody, Tyler, Cameron and Vivian, his great grandchildren, Avery, Allie, Mackenzie, Bentley and Emma and also many nieces and nephews. He was predeceased by his siblings, Raymond, Thomas, Vincent Freeman and Hilda Prince. Funeral Services are private due to the pandemic. In lieu of flowers donations may be made in Donald’s name to the Alzheimer’s Assoc., 309 Waverly Oaks Rd, Waltham, MA 02452.

The family of Donald W. Freeman created this Life Tributes page to make it easy to share your memories.

Peabody – Donald W. Freeman, 84, passed away surrounded by his...