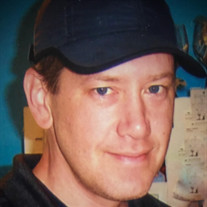 DANVERS- Donald H. “DJ” Amor, Jr., 41, passed away on April 28, 2018, following his difficult battle with addiction. Born in Danvers on February 14, 1977, he was the son of Susan (Liacos) Amor of Danvers and the late Donald H. Amor. He was a lifelong resident of Danvers and graduated from Danvers High School in 1995. DJ was known for his kind brilliance and warm heart. He enjoyed fishing and tinkering with electronics. In addition to his mother, he is survived by his grandmother, Emeline (Sprague) Liacos of Danvers, his sisters, Kimberly Lessard of Derry, NH and Jodi Amor of Danvers, several nieces, nephews, aunts, uncles and cousins. He was predeceased by his maternal grandfather, Arthur Liacos and paternal grandparents, Phyllis and Edward Amor. His Funeral Service will be held at 10AM on Thursday, May 3, 2018 at C.R. Lyons & Sons, Funeral Directors, 28 Elm St., Danvers. Visitation will be held on Wednesday, May 2, 2018 from 4-7PM in the funeral home. Burial will be held privately. In lieu of flowers, donations may be made in DJ’s name to the Calvary Christian Church, 47 Grove St., Lynnfield, MA, 01940 for the Celebrate Recovery Program.

The family of Donald "DJ" Amor Jr. created this Life Tributes page to make it easy to share your memories.