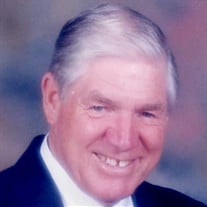 DANVERS- Donald Edward Cross, 88, peacefully passed away in his home on December 23, 2018, surrounded by his family. He was the loving husband of Rachel (Tamilio) Cross with whom he shared 66 years of marriage. Born in Beverly on March 4, 1930, he was the son of the late Stephen and Grace (Hooper) Cross. He was raised and educated in Beverly. Donald served our country with the United States Navy during the Korean War and was honorably discharged. His career in trucking for the Local 42 lasted over 40 years. Donald had been a resident of Danvers since 1956 and was a past member of the Amity-Masonic Lodge. He enjoyed volunteering for Special Olympics and for the Danvers Senior Center. In addition to his wife, Rachel, he is survived by four daughters, Dona Kenaley of Rochester, NH, Paula Gates and her husband, Donald of Danvers, Brenda Mahoney and her husband, Douglas of Rowley and Susan Grenier and her husband, Mark of Danvers, his brother, David Cross of Beverly, ten grandchildren, Timothy and Kathleen Kenaley, Donald, Bradley and Anthony Gates, Tiffany Gates-Benton, Rachel Cross-Mahoney, Megan, Samantha and Zackary Grenier, and four great grandchildren, Brooke, Bailey, Oliver and Soren Gates. He was predeceased by his son-in-law, Timothy Kenaley and siblings, Stephen and Robert Cross and Gloria Hughes. Donald’s family would like to acknowledge the staff of Care Dimensions for their caring and thoughtful services. The family would also like to thank the many caregivers who helped over the past few months. His Funeral Service will be celebrated at 11AM on Saturday, December 29, 2018 at C.R. Lyons & Sons, Funeral Directors, 28 Elm St., Danvers. Visitation will be held from 4-8PM on Friday, December 28, 2018. Burial is private. In lieu of flowers donations in Donald’s memory may be made to Care Dimensions, 75 Sylvan St., Danvers, MA, 01923 or the Danvers Senior Center, 14 Stone St., Danvers.

DANVERS- Donald Edward Cross, 88, peacefully passed away in his home on December 23, 2018, surrounded by his family. He was the loving husband of Rachel (Tamilio) Cross with whom he shared 66 years of marriage. Born in Beverly on March 4,... View Obituary & Service Information

The family of Donald Edward Cross created this Life Tributes page to make it easy to share your memories.

DANVERS- Donald Edward Cross, 88, peacefully passed away in his...