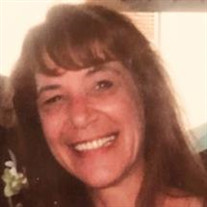 DANVERS - Dianne M. Noyes, 64, peacefully passed away on October 16, 2018, surrounded by her family in High Point Hospice House in Haverhill, after her courageous battle with Dementia. Born in Danvers on June 1, 1954, she was the daughter of the late Harry F. and Joan (Dunn) Noyes, Sr. She was raised and educated in Danvers and attended Danvers High School. She was a longtime Danvers resident. Dianne had been employed with Filene’s Basement for many years. She enjoyed dancing, music and making others smile. Dianne was also a Bruins hockey fan and loved going to games as well as loved spending time with her family. Dianne always had a youthful spirit, which lead to her title as the best “Pogo-sticker.” She is survived by her daughter, Jessica Noyes of N. Andover, her son, Stephen Noyes of Georgetown, her granddaughter, Peyton and soon to be a second granddaughter, her siblings, Marcia Noyes of TX, Peter Noyes and his wife, Betsy of Lynn, Harry Noyes, Jr. of Salem, Lisa Noyes and her companion, Michelle Sharp of N. Andover and Michael Noyes and his wife Nurys of FL, and George Scione, a very close family friend, who was like a second son to Dianne and many nieces and nephews. Visitation will be held from 4-7 pm on Sunday, October 21, 2018 at C.R. Lyons & Sons, Funeral Directors, 28 Elm St., Danvers. All other services are private. In lieu of flowers, donations may be made in Dianne’s name to the Dementia Society, PO Box 600, Doylestown, PA, 18901 or dementiasociety.org

DANVERS - Dianne M. Noyes, 64, peacefully passed away on October 16, 2018, surrounded by her family in High Point Hospice House in Haverhill, after her courageous battle with Dementia. Born in Danvers on June 1, 1954, she was the daughter... View Obituary & Service Information

The family of Dianne M. Noyes created this Life Tributes page to make it easy to share your memories.