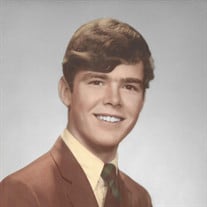 Dennis A. Lawrence, 67, died Tuesday, April 20, 2021 at the Portsmouth Regional Hospital following a lengthy illness. Born in Salem on Feb. 7, 1954, he was the son of the late Bernard and Rosetta (Spears) Lawrence. He was raised and educated in Beverly and was a 1972 graduate of Beverly High School. Dennis was employed as a young man at Bell’s Market in Downtown Beverly and then for more than thirty years at Oh Busters in North Beverly. He had been a longtime Beverly resident until relocating to Dover, NH where he lived and worked until the time of his passing. An active participant in Beverly Drum and Bugle Corps, he was a member of the Saint Mary’s Crusaders and Cardinals. He was an enthusiastic sports fan and enjoyed playing golf. Dennis leaves a sister, Carol Dunleavy and her husband John of Peabody, five brothers, Albert Lawrence and his wife Claudia of Conway, SC, Ronald Lawrence and his wife Joni of Salem, John “Jack” Lawrence and his wife Deborah of Salem, Barry Lawrence of Salem, and Brian Lawrence and his wife Rosemary of Peabody, as well as many nieces, nephews, and dear friends. Visiting hours are Monday, April 26, 2021 from 4-7PM in C.R. Lyons & Sons Funeral Directors, 28 Elm St., Danvers Square. Relatives and friends are invited. Attendees are kindly asked to wear face coverings and practice social distancing. All other services are private. In lieu of flowers, donations in Dennis’ memory may be made to the American Heart Assoc., 300 5th Ave, Waltham, MA 02451. For directions or to share an expression of sympathy with Dennis’ family, please visit www.LyonsFuneral.com.

Dennis A. Lawrence, 67, died Tuesday, April 20, 2021 at the Portsmouth Regional Hospital following a lengthy illness. Born in Salem on Feb. 7, 1954, he was the son of the late Bernard and Rosetta (Spears) Lawrence. He was raised and educated... View Obituary & Service Information

The family of Dennis A. Lawrence created this Life Tributes page to make it easy to share your memories.