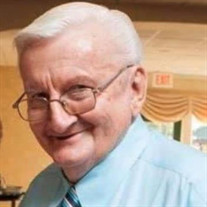 DANVERS-Dennis J. “Joe” Reardon, Jr., passed away on May 5, 2020 in Blueberry Hill Nursing Home. He was the husband of the late Janice (Groom) Reardon. Born in Danvers on September 30, 1942, he was the son of the late Dennis and Jennie (Innis) Reardon. Joe was raised and educated in Danvers. He left school to join the United States Air Force and was stationed at Lackland AFB in San Antonio, TX. Joe was then assigned to work at MIT in Cambridge; studying magnetic forces. After he was honorably discharged from the Air Force he went to work for George Peirce Engineering in Danvers. As part of his employment he was required to earn his G.E.D., not only did he earn his G.E.D but also received a degree in drafting. While at Peirce Engineering he designed many fish cutting machines used worldwide. Joe advanced his employed to BASF & Pier Engineering as a production engineer, all while working nights landscaping. Later, the landscaping turned into a full time job. Having no winter work, he and his wife started Reardon & Sons Oil and Winter Fuel until his retirement. He is survived by two sons, Dennis J. Reardon, III and his wife, Maureen of Peabody and Scott Reardon of Beverly and his wife, Laura Reardon of NH, his grandchildren, Krystyna Wood of NH, Dennis “Joey” Reardon, IV of Peabody and Amy, Adam and Angela Reardon all of NH, his great grandchildren, Andrew Grasso, Brianna, Noah and Tyler Tillson and Jake Reardon all of NH, his siblings, Kenneth Reardon of Danvers and Elaine Dodge of Topsfield and several nieces and nephews. He was predeceased by his granddaughter, Amanda Grasso and brother, David Reardon. His graveside service will be held at 11AM on Saturday, June 12, 2021 in Wadsworth Cemetery, Summer St., Danvers. In lieu of flowers donations may be made in Dennis’ name to the Danvers Garden Club, P.O. Box 167, Danvers, MA 01923. To leave a condolences message or for updated service information please visit www.LyonsFuneral.com

The family of Dennis "Joe" Reardon, Jr. created this Life Tributes page to make it easy to share your memories.