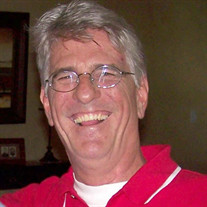 In the early hours of May 30, 2020, David J. Powers died from a brief illness just days from turning 60, in Largo, FL. David was born May 24, 1960 at Hunt Memorial Hospital in Danvers, MA, the third of seven children of Alfred Michael Powers and CarolAnn (Spears) Powers. David’s passion was all things sports. Full of life, accomplished athleticism and the social art of knowing copious sports statistics, he participated in sports from a very young age and throughout his life. A 1978 graduate of Danvers High School, David played football, basketball and baseball all four years. His journey continued to Bowdoin College in Brunswick, Maine, where he co-captained the 1981-82 Bowdoin Basketball team. That season, he became just the fifth player in school history to surpass 1,000 career points, five years prior to NCAA implementation of the three point shot. He is still ranked amongst Bowdoin’s top twenty all time career scorers and remains in the school’s top ten players for free throws attempted in a season and career. An exceptional multi sport athlete, David also excelled as a starting outfielder for Bowdoin’s baseball team. Most of David’s professional career revolved around sporting events as well. Most recent he worked in New Business Development for PMG. Sales/Sports Promotion and Advertising for major clients such as NASCAR, World Billfish Tour and Professional Bull Riders opened a new world of celebrity contacts and competition that he devoured. Recently he secured the advertising contract for the National Museum of the United States Army in Washington, DC. David was predeceased by his father Alfred “Mike” Powers and brothers Douglas and Scott Powers. He is survived by his devoted mother CarolAnn Powers and brother Michael (Maureen) Powers of Danvers, sister Cheryl (Michael) Doucette of Westbrook, Maine, brother Kevin (Robin) Powers of Highland Park, Illinois and sister Kathryn (Patrick) Murphy of Duxbury, MA. He is also survived by several nieces and nephews and their families. David is also survived by Serena Libby of Largo, FL with whom he spent many happy years as well as his final moments. The family is grateful for her watchful care over David. David’s wish is to cojoin his remains in the warm Gulf Coast, and services will be planned in Florida when travel and health restrictions are less complicated. Memory gifts in David’s name can be made to HomeBase.org, the largest private sector clinic in America with the sole focus of helping Veterans and Military Families or Wounded Warrior Family Support wwfs.org to support families of those wounded, injured or killed during combat operations, or to a charity of your own preference.

In the early hours of May 30, 2020, David J. Powers died from a brief illness just days from turning 60, in Largo, FL. David was born May 24, 1960 at Hunt Memorial Hospital in Danvers, MA, the third of seven children of Alfred Michael Powers... View Obituary & Service Information

The family of David J. Powers created this Life Tributes page to make it easy to share your memories.