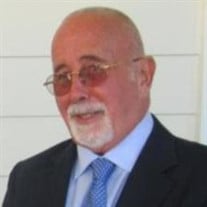 DANVERS- David J. McCarthy, 74, passed away at Beverly Hospital on December 27, 2021 following a brief illness. He was the loving husband of Maryanne (Donahue) McCarthy with whom he shared 44 years of marriage. He was predeceased by his parents, Thomas J. and Barbara (Nangle) McCarthy. David graduated from Danvers High in 1965 and Salem State College in 1970 with a business degree. He received his MBA from Suffolk University. He was an external auditor for Prudential Insurance after college and later worked in sales. He also worked as a postal clerk at the Danvers Post Office before retiring in 2008. He worked as a shift supervisor at CVS during retirement. David leaves behind a son, James Thomas and his wife, Ashley, from Danvers and a daughter, Erin Elizabeth, from Chelsea. He was so proud of his children and never missed an opportunity to talk about them. He also leaves behind his brother, Thomas J. McCarthy, his wife, Maura, and his nieces Meghan McCarthy and Cara O’Connor. David loved to travel and fell in love with Walt Disney World in 1980. After many trips, he decided to join the Disney Vacation Club and spent many happy vacations with his family there. He later discovered Hilton Head Island and that became a favorite, as well. David loved animals and adored his dog, Jack and his cat, Brady, as well as his beloved St. Bernard, Bella. His love for them knew no bounds. He was also an avid sports fan, never missing a Patriots or Red Sox game. He could watch one game after another knowing every statistic about every player on the field. He was loved by so many and will be greatly missed. His Funeral mass will be held at 11AM on Friday, June 3, 2022,in Saint Mary of the Annunciation Church, 24 Conant St., Danvers. Visitation will be held prior to the Mass in the church from 10:15AM- 11AM. In lieu of flowers donations may be made in David’s name to St. Jude Children’s Hospital at www.stjude.org or by mail at, 501 St. Jude Pl., Memphis, TN, 38105 or the Northeast Animal Shelter at www.northeastanimalshelter.org or by mail at 347 Highland Ave., Salem, MA, 01970.

DANVERS- David J. McCarthy, 74, passed away at Beverly Hospital on December 27, 2021 following a brief illness. He was the loving husband of Maryanne (Donahue) McCarthy with whom he shared 44 years of marriage. He was predeceased by his parents,... View Obituary & Service Information

The family of David J. McCarthy created this Life Tributes page to make it easy to share your memories.