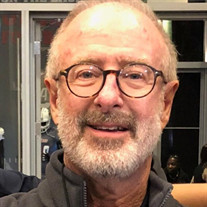 David J. Clarkson, 67, passed away at home on June 19, 2019 surrounded by his loving family. Husband of Ellen (Kolis) Clarkson, with whom he shared nearly 45 years of marriage. Born in Adams, MA on October 29, 1951, he was the son of the late Lawrence and Corine A. (Georgini) Clarkson. He was raised and educated in Adams and went on to receive his bachelor’s degree from the University of Massachusetts at Amherst. His career as a Certified Public Accountant and Human Resources executive began at Arthur Anderson in Boston in 1973 and continued with Caturano and Company and RSM until his retirement in 2014. Following retirement David taught at Bentley University, served on the Foundation Board at Bunker Hill Community College, and was Secretary of Ipswich Fish & Game where he enjoyed shooting trap with his teammates throughout the year. He developed new skills as a voiceover artist and expanded on his many hobbies from making homemade pasta to gardening and playing guitar. He loved classic cars, including his Cobra, 1966 Mustang and 1957 Oldsmobile Rocket 88, in which he and Ellen had many adventures from rides up the coast to Maine and across the mountains to Vermont. A resident of the North Shore since 1973 and Danvers, MA since 1984, he was very involved in his children’s lives coaching his sons in youth soccer and Little League baseball. He enjoyed bring new experiences into their lives and encouraging them to follow their dreams. He was an avid outdoorsman and would take the family on hikes through the Berkshires, or simply trekking through their backyard hunting for ‘clues’ to unknown mysteries. In his youth he would hike up Mt. Greylock in the middle of winter. David was exceptionally kind, giving and gregarious, making anyone who met him feel immediately welcome. He will be sorely missed by all who loved him. In addition to his wife Ellen he leaves his three children, Kathryn Clarkson Burne and her husband Andrew of Long Beach, CA, Jeffrey Clarkson and his wife Kimberly of Gloucester, MA and their daughter Dylan Rose and Jonathan Clarkson of Dorchester, MA. He also leaves his sister Nancy Kelley of Adams, MA and is pre-deceased by his brother Robert Clarkson and brother-in-law Martin Kelley. He leaves sisters-in-law Dorothy Clarkson of Florida, Gail Sellers and her husband Phil of North Adams, Lynn Herlihy and her husband Jim of Pennsylvania, a brother-in-law William Kolis and his wife Donna of Ohio, his mother-in-law Mary Jane Kolis of Adams and many nieces and nephews. His Funeral Mass will be celebrated at 9AM on Saturday, July 13th in Saint Richard Parish, 90 Forest St., Danvers followed by a Celebration of Life tribute at10:30AM Danversport Waterfront, 161 Elliott St. Danvers. In lieu of flowers donations can be made to the Friends of the Adams Memorial High School (AMHS) Class of '69 Scholarship, 2 Center St., Adams, MA, 01220 or Boston Children's Hospital, 401 Park Dr., Suite 602, Boston, MA, 02215.

David J. Clarkson, 67, passed away at home on June 19, 2019 surrounded by his loving family. Husband of Ellen (Kolis) Clarkson, with whom he shared nearly 45 years of marriage. Born in Adams, MA on October 29, 1951, he was the son of the late... View Obituary & Service Information

The family of David J. Clarkson created this Life Tributes page to make it easy to share your memories.