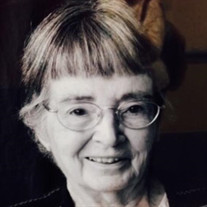 Corrine Alice (Roberts) Begin died Wednesday, May 10, 2017, at Brooksby Village in Peabody, Mass., at the age of 94. She was the daughter of the late Helen (Nichols) and Edward Roberts of Danvers and Jamaica Plain. She is survived by her sister, Eleanor (Roberts) Creese of North Andover and was predeceased by her brothers, Ernie Roberts of Cohassett and Herb Roberts of Jaffrey, N.H. Corrine was a graduate of Danvers High School, where she was an excellent student, spirited cheerleader, and had the distinction of being one of the first two female students to take Algebra. In 1945, she married her late husband, Lt. JG Phillip Joseph "Pat" Begin, U.S. Navy. They first resided in Quincy and later at 6 St. Hilaire Avenue, Danvers, where they raised their seven sons. In later years, Corrine and Pat divided their time between Grantham, N.H., and Hobe Sound, Fla., where they enjoyed playing golf and visiting with family and friends, before finally settling at Brooksby Village in Peabody. Corrine was an excellent cook, a talented seamstress, an accomplished knitter, and was the best wall-sitter among her family members and friends. For many years, she was the "cookie lady" at Danvers High School soccer games supporting her sons' teams. She was funny, smart, infinitely compassionate and loving, and capable and talented in so many ways. She is survived by her son, Phillip "Phil" and his wife, Kum Hyang of Millbrea, Calif.; son, Richard "Dick" and his wife, Mary (Morris) of Lake Oswego, Ore.; son, Kenneth "Ken" of Port Salerno, Fla.; daughter-in-law, Donna (Gedrimas) Begin of Medford, Mass.; son, Steven and his wife, Elizabeth (Santos) of Hillsboro, N.H.; son, John "Jack" and his wife, Stacey (Bartol) of Groveland, Mass.; and son, William "Bill" and his wife, Heidi (Brennan) of Georgetown, Mass. She was predeceased by her loving son, Paul Begin of Medford, Mass. Her family meant the world to her and she enjoyed visiting with them, hearing of their adventures, and celebrating the accomplishments of her 15 wonderful grandchildren and 11 magnificent great-grandchildren. Rest in Peace, Muz! A Memorial Mass will be celebrated on Saturday, May 27, 2017, at 9 a.m. in Saint Mary of the Annunciation Church, Conant Street, Danvers. Visiting hours will be held from 4 to 8 p.m. on Friday, May 26 at C.R. Lyons & Sons Funeral Directors, 23 Elm Street, Danvers. In lieu of flowers, donations in Mrs. Begin's name can be made to Brooksby Village Benevolent Care Fund, 100 Brooksby Village Dr., Peabody, MA 01960

Corrine Alice (Roberts) Begin died Wednesday, May 10, 2017, at Brooksby Village in Peabody, Mass., at the age of 94. She was the daughter of the late Helen (Nichols) and Edward Roberts of Danvers and Jamaica Plain. She is survived by her sister,... View Obituary & Service Information

The family of Corrine A. Begin created this Life Tributes page to make it easy to share your memories.