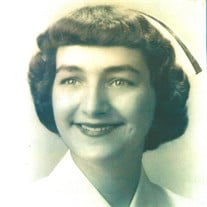 Corinne C. Manning, 90, of Brooksby Village, Peabody, died on May 17, 2020 after a long illness. Born on September 3, 1929 in Lynn, daughter of the late Alfred and Eva (Bourgeois) Dupuis, Corinne was a graduate of St. Jean’s High School in Lynn, Class of 1948 and Lynn Hospital School of Nursing, Class of 1951. A dedicated surgical nurse, she enjoyed a long career until her retirement in 1996 from the Cape Cod Hospital in Hyannis. Upon returning to the North Shore in 2004, Corinne continued her dedication to patient care as a volunteer at Salem Hospital for many years. Corinne married Robert Manning of Lynn in 1954, they raised their family first in Danvers, then moving to San Rafael, California in 1971 and then, due to Robert’s declining health to Centerville, Cape Cod in 1976 where Robert died in 1987. Corinne is survived by her daughter, Susan Manning of Quincy, her son, Thomas Manning of Beverly, and her daughter, Linda Manning of Washington, DC. She also leaves a brother, Gerald Dupuis, of Salem; two stepsisters, Gloria Powers of Danvers and Phyllis Sylvanowitz of New Brunswick, Canada, a nephew, Wayne Eisenhauer of Danvers, as well as several other dear relatives and friends. Besides her husband, Corinne was predeceased by her brothers Leo and Norman Dupuis, her stepmother Mae Dupuis and her stepsister, Pauline Novick. A Memorial Mass will be held in the future at St. Richard’s Church, Forest Street, Danvers, where Corinne and Robert were one of the family founders and parishioners. Interment in Mosswood Cemetery, Cotuit, MA beside her beloved husband, Robert. In lieu of flowers, memorial contributions may be made to the Danvers Historical Society, 11 Page Street, Danvers, MA 01923 Attn: Glen Magna Farms Arboretum Fund. Arrangements are by C.R. Lyons & Sons Funeral Directors, 28 Elm St./, Danvers Square. To leave a message of sympathy for Corinne's family, please visit www.LyonsFuneral.com.

Corinne C. Manning, 90, of Brooksby Village, Peabody, died on May 17, 2020 after a long illness. Born on September 3, 1929 in Lynn, daughter of the late Alfred and Eva (Bourgeois) Dupuis, Corinne was a graduate of St. Jean&#8217;s High School... View Obituary & Service Information

The family of Corinne C. Manning created this Life Tributes page to make it easy to share your memories.