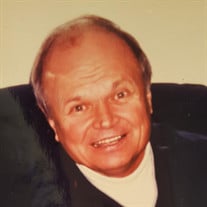 Conrad M. Gozewski, 86, passed away early on the morning of January 30th, in Danvers Massachusetts, He is survived by his loving wife, Sharon (Taskey) Gozewski. Mr. Gozewski was born in Somerville, MA in 1934. While living in Poland at the beginning of World War II, he was the sole son of his father, Marian Gozewski, who was arrested by the Soviet Union for being a capitalist land owner. He was deported to a labor camp at the beginning of World War II in 1939. Two months later, the rest of the family was arrested and deported to Siberia. They were released in 1941. Moving back to the United States in 1946, he settled in Lancaster MA, under the care of his dear departed sister Elenore, who passed in 2015. There, Elenore and her husband, Henry, started Neck Road Dairy Farm while providing for Conrad. He attended Lancaster public schools. He was reunited with his Father, who survived the war, in 1953. Conrad enlisted in the US Air Force in 1954. He was honorably discharged in 1958. He then attended college at both Northeastern University and Boston University studying engineering and physics. He received an Associate in Science Degree from Boston University in 1961. In 1961 he was employed by EG&G where he participated in the US nuclear testing programs as an experimental photographer, in both New Mexico and Nevada, as well as the South pacific. Operations “Nougat” and “Crosscheck” being highlights. In 1964 he settled in North Woburn, MA with his first wife, Ann Jackson. Conrad and Ann divorced in 1975. Conrad Met his wife, Sharon Taskey in 1989 and they married in 1997. Conrad spent 40 years as a research engineer for EG&G, Ealing, Diebold, Aerodyne Research and finally, Foster Miller, contributing significantly in the fields of Lasers and Physics. He retired from research in these fields in 2000. He leaves his children: Phillip Gozewski, of Boston MA, Eric Gozewski and his wife Sandy, of Rowley MA, and Paul Gozewski and his wife Carol, of Haverhill MA; Terri Turner of Hamilton MA, Todd Taskey and his wife Sharon, of Maryland, Tonya Nye of Marblehead, Tedd Taskey and his wife Tiffany, of Colorado, Tricia Modifica and her husband, Mark of Connecticut; his dear departed sister Elenore’s children; nephew, Robert Kloczkowski and his wife, Rebecca, of Loveland, Ohio; niece, Dianne Romero and her husband, Alfredo of Brentwood, Calif. Included are his many grandchildren, Peter, Mackenzie, Abigail, Samantha, Alyssa, James, Zachary, Ashley , Mia., Marissa, Kira, Matteo. He was a much-loved great-uncle to Dana Romero’s daughters, Christy, Alicia and Katrina, as well uncle to many nieces and nephews form the Jackson Family. Visiting hours will be Monday, February 8, 2021 from 4-6PM in C.R. Lyons Funeral Directors, 28 Elm St., Danvers. Burial services will be held privately in Annunciation Cemetery, Danvers. Donations may be made in his memory to the Danvers Historical Society, P.O. Box 381, Danvers, MA 01923 or American Heart Association, 300 5th Ave, Waltham, MA 02451. For directions or to share an expression of sympathy with Conrad’s family, please visit www.LyonsFuneral.com.

Conrad M. Gozewski, 86, passed away early on the morning of January 30th, in Danvers Massachusetts, He is survived by his loving wife, Sharon (Taskey) Gozewski. Mr. Gozewski was born in Somerville, MA in 1934. While living in Poland at the... View Obituary & Service Information

The family of Conrad M. Gozewski created this Life Tributes page to make it easy to share your memories.

Conrad M. Gozewski, 86, passed away early on the morning of January...