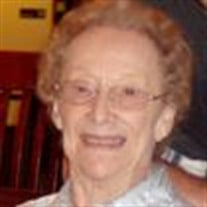 DANVERS- Claire F. (Cherbuy) (Griffin) Nelson, 89, passed away, following a brief illness on March 3, 2016 in Beverly Hospital. She was the wife of the late Victor Nelson and J. William Griffin. Born in Lynn on April 13, 1926, she was the daughter of the late Joseph and Celia (Twiss) Cherbuy. She was raised and educated in Peabody and graduated from Peabody High School. Claire was a resident of Danversport for over 70 years, where she raised her family. In her younger years, she enjoyed camping with her family, initially in Dennisport, Cape Cod for 30 years and then in New Hampshire. She was a true Red Sox fan, and traveled to many cities to cheer them on. She was an avid bowler and also enjoyed bike riding. Claire had been a longtime member of the Polish, Russian, Lithuanian Citizens Club of Danvers and the French American Club in Beverly. She is survived by her five children, Jude Griffin White and her husband Dan, Robin Helling, J. William Griffin and wife his wife Nanette, Kathleen Power and her husband Kevin and Shawn Griffin and his wife Debra, five grandchildren, Jenna Jutras and her husband Norman, Justin Power and his wife Shannon, Matthew Power, Christine Sheal and her husband Kevin and Charles Helling and his wife Tiffany, five great grandchildren and several nieces and nephews. Her Funeral Mass will be celebrated at 9AM on Tuesday March 15, 2016 in Saint Mary of the Annunciation Church, 24 Conant St., Danvers. Burial will follow in Saint Mary Cemetery, Salem. Visitation will be held on Monday from 6-8PM at C.R. Lyons & Sons, Funeral Directors, 28 Elm St., Danvers. In Lieu of flowers, expressions of sympathy may be made in Claire and J. William Griffin’s name to Guiding Eyes for the Blind, 611 Granite Springs Rd, Yorktown Heights, NY, 10598.

DANVERS- Claire F. (Cherbuy) (Griffin) Nelson, 89, passed away, following a brief illness on March 3, 2016 in Beverly Hospital. She was the wife of the late Victor Nelson and J. William Griffin. Born in Lynn on April 13, 1926, she was the... View Obituary & Service Information

The family of Claire F. Nelson created this Life Tributes page to make it easy to share your memories.