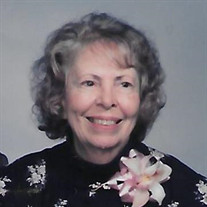 Claire G. (Dennison) Samson, 93, died at New England Home for the Deaf in Danvers on December 1, 2015 after a brief illness. She was the beloved wife of the late Neville Samson with whom she shared 70 years of marriage, who passed away September 28, 2015. Born in Waltham on Jan. 5, 1922, she was the daughter of the late Walter and Alice (Robie) Dennison. Claire attended the Horace Mann School in Randolph and graduated from the Allen School for Girls in Newton. She worked for the National Park Service and Time Warner Corp in Boston from which she retired. She also worked part time after her retirement at New England Home for the Deaf. In her earlier years, she was an active volunteer, having founded "Friends of the Home", a support group which helped the elderly residents of NEHD. She also enjoyed her charity work with the children at Perkins School for the Blind. Family was everything to Claire. She was a selfless, compassionate and generous person. She notably demonstrated this by donating a kidney to her daughter, Olivia in 1974. She is survived by her daughters, Olivia McDonough and her husband Thomas of Great Falls, VA and Loretta Lewis and her husband, Barry of Parrish, FL, grandchildren, Alison McDonough (Rory Madden), Meghan Fontaine (Jon), Amy McDonough, Kathryn Sneed (Jon), Michael Belliveau and Mark Belliveau, great grandchildren, Adam, Elizabeth and Madeline, nieces Linda Schickling, Pamela Nawrocki, Cynthia DeFeo and nephew Thomas Butler. She is also survived by a special nephew, Charles Drinkwater, 88, who is more like a brother. Claire was predeceased by two brothers, Stanford Dennison and Norman Vokes, a sister, Hazel Dennison Wheeler. She was loved by all who knew her and will be missed by those whose lives she touched. "You are forever in our hearts". A remembrance and interment of ashes will take place in NH at a future date. In lieu of flowers, a memorial donation may be made in Claire’s name to The National Kidney Foundation, 85 Astor Ave # 2, Norwood, MA, 02062.

Claire G. (Dennison) Samson, 93, died at New England Home for the Deaf in Danvers on December 1, 2015 after a brief illness. She was the beloved wife of the late Neville Samson with whom she shared 70 years of marriage, who passed away September... View Obituary & Service Information

The family of Claire G. (Dennison) Samson created this Life Tributes page to make it easy to share your memories.