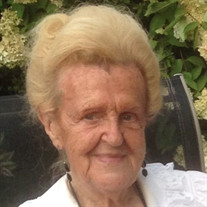 Cile Bellefleur Burbidge, the woman who brought the art of the wedding cake to its absolute zenith, died Sunday at her home in Danvers. She was 89. Cile was born in Nashua, New Hampshire in 1926. From an early age she had a strong sense of craft and a love of creating beauty. Growing up, this passion found two outlets: cooking and sewing. It was this second love, which led Cile to enroll at the New England School of Art in Boston where her dream was to someday scale the ramparts of Seventh Avenue fashion or take Paris by storm. She never made her mark in fashion, but her innate understanding of hand craft as well as her eye for beauty would lead her to her greatest undertaking a decade later. It was while studying fashion in Boston that Cile met a young fellow student named John Burbidge, just returned from the war in Europe to resume his own fashion studies. Cile had a boyfriend at the time, but knew that John, the dashing young Corporal with wavy black hair and an impish grin was the man for her. In the end Cile got John and this month marks their 65th wedding anniversary. John passed two months ago in March. With John working as a bridal designer at Priscilla’s of Boston and Cile pregnant with their first daughter Christine, a career in fashion was put on hold. And Christine was to be followed by four more little ones over the next 10 years—Susan, Richard, Anne and Jenifer. Cile never returned to the world of high fashion. But never forsaking her impeccable needlework skills, it was in the early 1950s that Cile made a foray into the world of micro fashion. “Miss Cile’s” was a line of smart dresses for little girls. John sketched the designs and Cile did the rest. Their daughters modeled the dresses and their “factory” was in the basement. The tiny business grew and soon they were taking orders and placing ads in magazines such as Town & Country and Yankee. Some dresses boasted prices as high as $10.95; an unthinkable amount for a child’s dress in 1955. With Cile pregnant with their third child Richard and with John working full time in Boston, they decided to shutter Miss Cile’s and put family first. Soon after Richard’s birth Cile felt in desperate need of some form of creative outlet. The cure for her malaise would take the unlikely form of a cake decorating class at the local YMCA. Cile took to it instantly and excelled. Student soon outstripped teacher and within three years Cile began teaching her own cake decorating course. She charged $3 a lesson and her classroom (aka the family’s renovated garage) was always packed. Lessons often ran until 2 AM! Cile reckons that in total she instructed 3,000 people in the fine art of cake decorating--quite a feat when one considers that during much of this time Cile was also a full time Home Economics teacher at Danvers High. Cile’s early cake designs were inventive and technically complex, but decidedly novel--think Humpty Dumpty cake, a rotary telephone cake or a Scarlett O’Hara cake and you get the picture. But Cile soon starting taking commissions for wedding cakes, which called for a more refined touch. She took inspiration from the grand bridal cakes of the Victorian age—no fondant here—and these new cakes were in a league all their own. Decorated with frosting flowers, urns, statuary, archways, buttresses, trellises and colonnades, they were masterworks in architecture as much they were in sugar. The famous Vogue Magazine writer and food critic, Jeffrey Steingarten in 2002 referred to Cile as “the leading practitioner” of the art of the wedding cake and said “to cast your eyes upon any of her cakes will take your breath away.” He also admitted to never having tasted one, but rest assured they tasted as good as they looked. While John’s career as a designer of bridal gowns was slowing down, Cile’s star was on the rise as the world’s preeminent maker of wedding cakes and she was welcomed everywhere from the White House to the Cordon Bleu. Five of her cakes were commissioned for Tiffany’s windows on 5th Avenue in New York and at her height her cakes graced the covers of such magazines as Gourmet and Chocolatier and were the subject of two books written by Cile. Cile Burbidge’s cakes circled the globe as emissaries of elegance for weddings both big and small. There was the wedding on top of a mountain in Colombia where the bride’s mother carried the cake through the jungle, and the cake made in honor of a Nigerian chief. By the way, Cile and John delivered it in person to Nigeria. And of course the cake that took Cile to Paris and won first place in a competition of international pastry chefs. Did I mention the cake was 6 feet tall? In later years Cile never slowed down. Social butterflies both, Cile and John were very active in Danvers and remained in constant contact with friends the world over. More recently wedding cakes gave way to quilts as Cile’s great passion. She loved her husband John deeply and the two were rarely apart. Always close with family, Cile’s children remained close by. She is lovingly survived by Christine Crowley (Kevin) of Danvers, Susan Burbidge (Kim Burman) of Jamaica Plain, Richard Burbidge of Jamaica Plain, Anne Hayeck (Albert) or Worcester and Jenifer Cavanaugh (Gary) of Newbury. She was also the cherished grandmother to Sean, Ryan and Brenna Crowley, Stephanie and Peter Hayeck, and Claire and Colin Cavanaugh. Her Funeral Mass will be celebrated at 9AM on Thursday, June 2, 2016 in Saint Mary of the Annunciation Church, 24 Conant St., Danvers. Burial will be held privately. Visiting hours are Wednesday, June 1, 2016 from 4-7PM at C.R. Lyons & Sons, Funeral Directors, 28 Elm St., Danvers. In lieu of flowers, expressions of sympathy may be made in Cile’s name to Care Dimensions, 75 Sylvan St., Danvers, MA, 01923 or a charity of one’s choice. www.LyonsFuneral.com

Cile Bellefleur Burbidge, the woman who brought the art of the wedding cake to its absolute zenith, died Sunday at her home in Danvers. She was 89. Cile was born in Nashua, New Hampshire in 1926. From an early age she had a strong sense... View Obituary & Service Information

The family of Cile Burbidge created this Life Tributes page to make it easy to share your memories.

Cile Bellefleur Burbidge, the woman who brought the art of the...