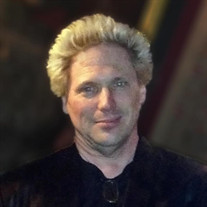 SALEM-Christopher B. Corkum, 58, passed away peacefully on January 1, 2022, with an immediate family member and a long-time family friend beside him after a month-long battle with Covid-related illness. Born in Danvers, MA, he was the loving son of the late Lorraine (Zdanowicz) Allison and the late Harold Corkum, and the grandson of the late Jennie (Wesnieski) Zdanowicz and Stanley Zdanowicz. He is survived by many cousins. He was a graduate of Marblehead High School and The School of the Museum of Fine Arts in Boston. Christopher was a talented Animator and Sketch Artist who also loved movies. He had some small acting roles in the 2016 remake of “Ghostbusters,” the 2013 short film “The History of Halloween,” and 1991's “Bill & Ted's Bogus Journey.” He appeared as himself in the 2012 documentary, “All Ages: The Boston Hardcore Film” and VH1's “Storytellers with Billy Idol” in 2001. His other filmography credits include 1984's “Screamplay” (Production Assistant), the 1987 Dokken music video “Burning Like A Flame” (Animation Crew) and the 1989 film short, “Kakania” (Animation Coloring Assistant). In the Late-1990s he also worked seasonally as a costumed actor for several horror-themed attractions in downtown Salem. In the 1980s he worked part-time in his parent’s antique bookstore in Marblehead, MA which led to his love of literature. He also had several Pet Grooming jobs in his younger years. Christopher’s knowledge of music was unparalleled. You could always pick him out of a crowd by his spiked blonde hair that always drew comparisons to one of his favorite musicians, Billy Idol. He recently started a tribute band named False Idol. He was an active and enthusiastic part of the local music scene whose presence and big megawatt smile always lit up the room and the stage. He was a very big fan of rock musician Glen Danzig (ex-Misfits/Samhain/Danzig) and was the vocalist for a Misfits cover band called 138 that regularly played out for the last 10 years. 138 always drew big crowds in downtown Salem during the City's annual October “Haunted Happenings” live events. Christopher was a wonderful, loyal friend with a great sense of humor. He had such a strong moral compass; he hardly ever told a lie and would never betray you. Christopher loved animals and owned several Shetland Sheep Dogs (“Shelties”) over the years, including his current canine companion, “Beau” who was his main concern while he was in the hospital. Beau is being adopted into a wonderful new home with a family friend. Beau will continue to enjoy “walkies” at their favorite place, The Chandler Hovey Lighthouse. Christopher's family will hold a private memorial service at a future date. In lieu of flowers donations may be made in Christopher’s name to the Northeast Animal Shelter, 347 Highland Ave, Salem, MA, 01970.

SALEM-Christopher B. Corkum, 58, passed away peacefully on January 1, 2022, with an immediate family member and a long-time family friend beside him after a month-long battle with Covid-related illness. Born in Danvers, MA, he was the loving... View Obituary & Service Information

The family of Christopher B. Corkum created this Life Tributes page to make it easy to share your memories.

SALEM-Christopher B. Corkum, 58, passed away peacefully on January...