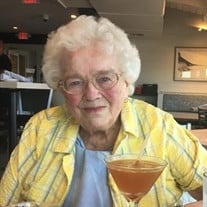 BEVERLY – Christine M. (O’Connor) Curran, 86, peacefully passed away on November 26, 2019 in Rosewood Nursing Home in Peabody. She was the wife of the late Joseph A. Curran, Jr. Chris and Joe raised a large loving family in Danvers, and the family spent many happy years making memories at their beloved camp on Salmon Lake in Oakland, ME. She is survived by five children, Joseph Curran, III and his wife, Susan of NH, Thomas Curran and his wife, Jennifer of Beverly, Patricia Cook of ME, Maureen Croce and her husband, Bob of Peabody and Tim Curran and his wife, Karin of Dudley. She is also survived by eleven grandchildren, Megan Gerbino, Sean Curran, Samantha, Kimberly and Thomas Curran, Matthew and Christopher Learoyd, Erin and Ashley Croce and David and Breanna Curran; three great grandchildren, Aiden, Brooklyn and Dexter. She was predeceased by her brother, Daniel O’Connor and her son-in-law, Winston Cook. Born in Salem on September 22, 1933, Chris was the daughter of the late Daniel and Myrtle (Grace) O’Connor. She was raised and educated in Salem and graduated from Salem High School in 1951. She went on to receive her bachelor’s degree from the Salem Teachers’ College in 1955. Prior to her retirement, Chris had been a seventh-grade teacher at the Belmonte Middle School in Saugus for 30 years. Visitation will be held from 4-7 p.m. on Thursday, December 5, 2019 immediately followed by a celebration of her life at 7:15PM at C.R. Lyons & Sons, Funeral Directors, 28 Elm St., Danvers. In lieu of flowers donations may be made in Christine’s name to the American Heart Association, 300 5th Ave, Waltham, MA, 02451 or www.heart.org

BEVERLY &#8211; Christine M. (O&#8217;Connor) Curran, 86, peacefully passed away on November 26, 2019 in Rosewood Nursing Home in Peabody. She was the wife of the late Joseph A. Curran, Jr. Chris and Joe raised a large loving family in Danvers,... View Obituary & Service Information

The family of Christine M. Curran created this Life Tributes page to make it easy to share your memories.